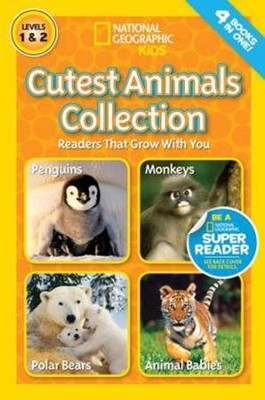 Help kids learn to read as they learn about cute animals with National Geographic Reader Collections!

Level 1 National Geographic Readers are just right for kids who are beginning to read on their own.

Level 2 National Geographic readers are designed for kids who are reading independently, and who are ready for longer sentences and more complex vocabulary.

The fascinating photography and fact-based text will engage students and get them interested in penguins, monkeys, polar bears, and animal babies.

▼▲
Some have fuzzy fur, or big adorable eyes, others love to cuddle, but all have the power to make you say "aww!" National Geographic Kids brings readers some of their reader's favorite cute animals in one convenient package. Roly-poly polar bears, waddling penguins, funny monkeys, and amazing animal babies are all adorable in their own way, and have won their way into kids' hearts all over the world. Fascinating animal information is accompanied by wonderful photographs to ensure that kids' natural curiosity is both satisfied AND inspired.

▼▲
Anne Schreiber is a thought leader in new media and education with more than 20 years of experience as a multimedia publisher, product developer, and educator. During her 12-year tenure at Scholastic, she was a publisher of reading, science, and assessment products. Anne also developed content for the award-winning television show The Magic School Bus. While working at Sesame Workshop, she created material for the flagship science show 3-2-1 Contact. Anne began her career as an elementary school teacher and is the author of more than two dozen books for young children. She lives in Brooklyn, New York. Laura Marsh has worked in children's publishing for 20 years as an editor and currently as an author. She has written numerous books in the National Geographic Kids Readers series, including Sea Otters, Turtles, and Red Pandas. Marsh has also authored titles in the Mama Mirabelle series and the Toot & Puddle series. Amy Shields is a longtime editor of National Geographic books who is known for her work in children's literature. She has written several popular titles, including Little Kids First Big Book of Why and numerous installments for the National Geographic Readers series. Shields lives in upstate New York with her beloved dogs, Jenny and Toby.

▼▲
I'm the author/artist and I want to review National Geographic Readers: Cutest Animals Collection.
Back