Skip to main content
Nate the Great and the Stolen Base
By: Marjorie Weinman Sharmat
Stock No: WW409320 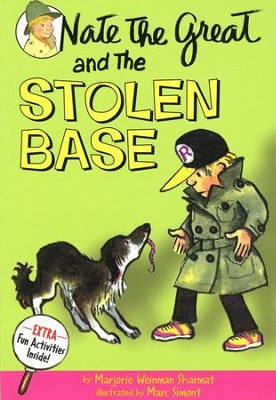 Nate the Great and the Stolen Base

▼▲
Rosamund's baseball team has a very unusual second base-Oliver's gloopy purple plastic octopus. But one morning . . . it's gone! "Somebody stole second base," Rosamond tells teammate Nate the Great. With the help of his dog, Sludge, the young detective trails the missing octopus, picking up clues along the way. It's not easy to track down a stolen base, and Nate's hunt leads him to some strange places before he finds himself up at bat once more.

Beginning readers are introduced to the detective mystery genre in these chapter books. Perfect for the Common Core, kids can problem-solve with Nate, using logical thinking to solve mysteries!

Rosamund's baseball team has a very unusual second base—Oliver’s gloopy purple plastic octopus. But one morning . . . it’s gone! Nate the Great must pick up clues so he can find the missing octopus and go up to bat!

Check out the Fun Activities section in the back of the book!

"Subtle humor sparkles through the young detective's narration and his interactions with his friends. Budding mystery fans will line up for this one."--School Library Journal

▼▲
MARJORIE WEINMAN SHARMAT has written more than 130 books for children and young adults, as well as movie and TV novelizations. Her books have been translated into twenty-four languages. The award-winning Nate the Great series, hailed in Booklist as "groundbreaking," has resulted in Nate’s real-world appearances in many New York Times crossword puzzles, sporting a milk mustache in magazines and posters, residing on more than 28 million boxes of Cheerios, and touring the country in musical theater. Marjorie Weinman Sharmat and her husband, Mitchell Sharmat, have also coauthored many books, including titles in both the Nate the Great and the Olivia Sharp series.

MARC SIMONT won the Caldecott Medal for his artwork in A Tree Is Nice by Janice May Uldry, as well as a Caldecott Honor for his own book, The Stray Dog. He illustrated the first twenty books in the Nate the Great series.

▼▲
Praise for the Nate the Great Series

"Nate, Sludge, and all their friends have been delighting beginning readers for years." —Kirkus Reviews

"They don’t come any cooler than Nate the Great." —The Huffington Post

▼▲
I'm the author/artist and I want to review Nate the Great and the Stolen Base.
Back
Back