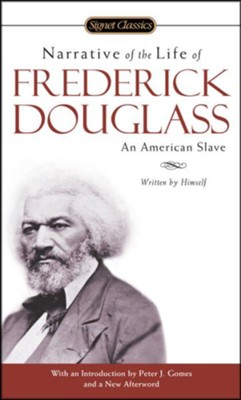 Narrative of the Life of Frederick Douglass

▼▲
Fredrick Douglass' account of his life as a slave, and finally as a freedman, is one of the most dramatic tales in American history. His narrative takes us into the daily terrors enslaved people suffered and is a record of the savagery and inhumanity of the slave-owners. With an introduction by Peter J. Gomes and an afterward by Gregory Stephens. 144 pages, softcover.

▼▲
Frederick Douglass's dramatic autobiographical account of his early life as a slave in America.

Born into a life of bondage, Frederick Douglass secretly taught himself to read and write. It was a crime punishable by death, but it resulted in one of the most eloquent indictments of slavery ever recorded. His gripping narrative takes us into the fields, cabins, and manors of pre–Civil War plantations in the South and reveals the daily terrors he suffered.

Written more than a century and a half ago by a Black man who went on to become a famous orator, U.S. minister to Haiti, and leader of his people, this timeless classic still speaks directly to our age. It is a record of savagery and inhumanity that goes far to explain why America still suffers from the great injustices of the past.

With an Introduction by Peter J. Gomes
and an Afterword by Gregory Stephens

▼▲
Frederick Douglass, born around 1817, was the son of an African-American woman and a white slaveholder. Brilliant and brave, Douglass once led a minor insurrection against his masters—but unlike the famous Nat Turner, Douglass escaped his venture alive. While still a young man he fled, hungry and hunted, to the North, where he was befriended by abolitionists. His dramatic autobiography was published in 1845, creating a sensation and spurring Douglass’s career as a militant, uncompromising leader of African-Americans. He recruited African-American volunteers for the Civil War and later secured and protected the rights of the freemen. Douglass later became secretary of the Santo Domingo Commission, Recorder of Deeds in the District of Columbia, and United States Minister to Haiti. He died in 1895.

Peter J. Gomes was the minister at Memorial Church at Harvard University from 1974 until his death in 2011. Among his many books are The Good Book: Reading the Bible with Mind and Heart and Strength for the Journey: Biblical Wisdom for Daily Living.

Gregory Stephens is Lecturer of Cultural Studies and Film in the Department of Literature in English, University of West Indies—Mona. He is the author of On Racial Frontiers: The New Culture of Frederick Douglass, Ralph Ellison, and Bob Marley. Previously he was an award-winning songwriter and journalist in Austin and Laredo, Texas, as well as a bilingual public school teacher (Spanish/English). He lives in Kingston, Jamaica.

▼▲
"This narrative contains many affecting incidents, many passages of great eloquence and power&hellip;Who can read [it], and be insensible to its pathos and sublimity?"—William Lloyd Garrison

"He experienced&hellip;the tyranny and circumscription of an ambitious human being who was classified as real estate."—W.E.B. DuBois

▼▲
I'm the author/artist and I want to review Narrative of the Life of Frederick Douglass.
Back
×
Back
×