Skip to main content
Get Christmas Ready Sale: Deals on over 1,150 titles thru 9/27.
Naming Neoliberalism: Exposing the Spirit of Our Age
By: Rodney Clapp
Stock No: WW472654 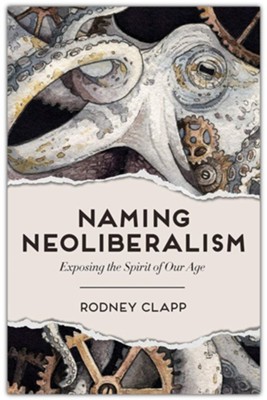 Naming Neoliberalism: Exposing the Spirit of Our Age

Neoliberalism is the reigning, overarching spirit of our age. It consists of a panoply of cultural, political, and economic practices that set marketized competition at the center of social life. The model human is the entrepreneur of the self. Though regnant, neoliberalism likes to hide. It likes people to assume that it is a natural, deep structure--just the way things are. But in neoliberalism's train have come extreme inequality, economic precariousness, and a harmful distortion of both the individual and society. Many people are waking up to the destructive effects of this order. Anthropologists, economic historians, philosophers, theologians, and political scientists have compiled considerable literature exposing neoliberalism's pretensions and shortcomings. Drawing on this work, Naming Neoliberalism aims to expose the order to a wider range of readers--pastors, thoughtful laypersons, and students. Its theological base for this "intervention" is apocalyptic--not in the sense of impending doom and gloom, but in the sense of centering on Christ's life, death, and resurrection as itself the creation of a new and truer, more hopeful, and more humane order that sees the principalities and powers (like neoliberalism) unmasked and disarmed at the cross. The book carefully lays out what neoliberalism is, where it has come from, its religious or theological pretensions, and how it can be confronted through and in the church.

Rodney Clapp is an editor at Cascade Books in Eugene, Oregon. He is a former columnist for The Christian Century and the author of several books, including the award-winning A Peculiar People: The Church as Culture in a Post-Christian Society (1996), Tortured Wonders: Christian Spirituality for People, Not Angels (2004), and New Creation: A Primer on Living in the Time between the Times (2019). He lives in Wheaton, Illinois.

"Rarely are critiques of neoliberalism followed by beautiful, constructive proposals for alternative ways to live. By giving us both, Clapp offers this book as a gift to the church. The converse is also true: it is important not only to identify the life-affirming work churches are called to do but also to help congregations name and understand the dominating power of our age. Only when we are clear about what the gospel frees us from and frees us for, Clapp well argues, may the church be a relevant witness against the power and principality of neoliberalism that opposes God's reign." -- Jennifer M. McBride, author Radical Discipleship: A Liturgical Politics of the Gospel,associate professor of theology and ethics, McCormick Theological Seminary

"This concise and accessible analysis takes us beneath the fear, inequality, war, hunger, and environmental devastation of the present age and shows us how they operate. Rodney Clapp unpacks the ideologies that try to convince us that the world must be so, and then offers resources from the Christian tradition to enact a more livable world. No one is more skilled at bridging the scholarly and pastoral contexts than Rodney Clapp." -- William T. Cavanaugh, DePaul University

"Let's be honest. As pastor of a politically split church, I am not looking for ways to introduce more politics into congregational life. In an age of tweets and squawking, I thirst for the Peace of Christ. But after reading Rodney Clapp's Neoliberalism, I also see how hungry and lonely I have been, while wandering in this desert of culture wars, for some weight and wisdom from a spiritual tradition that is older, larger and deeper than I am. Somehow, Clapp uses a hot button topic to model how to have a cool Christian conversation, across the aisles of politics or pews. I would gladly introduce this book to my church members, for its sense of perspective but most of all for its contagious hope for a church where God is still speaking louder and more lovingly than the pundits." -- Lillian Daniel, senior pastor of First Congregational Church of Dubuque, Iowa and author of Tired of Apologizing for a Church I Don't Belong to.

"Rodney Clapp has written a profoundly pastoral book that prophetically unmasks neoliberalism not only as a rival ethic to the church but as a rival theology. By telling the story of how neoliberalism came to seem not only plausible but necessary, Clapp empowers the reader to perceive where alternative community responses can be cultivated. Jesus's kingdom proclamation disarmed the powers and revealed a new, inbreaking reality. Rodney Clapp's book follows in that exalted tradition." -- Samuel Wells, Vicar, St Martin-in-the-Fields

"If you sense that something seems wrong with current manifestations of US Christianity, with our economic inequality, and our culture warring, but naming it is not easy then this book is for you. Clapp's Naming Neoliberalism is the best historical and theological analysis of where we are, how we got here, and what might be done about it, available to us. From a history of enclosures to an examination of slavery, a journey through the Thatcherite and Reagan complete capitulation to neoliberalism, followed by the Clinton willing acquiescence and much more, Clapp traces the history of neoliberalism judiciously, carefully, and with theological insight. This book is a must read for every thoughtful person and is even more important for those who are thoughtless." --D. Stephen Long, Maguire University Professor of Ethics, Southern Methodist University

▼▲
I'm the author/artist and I want to review Naming Neoliberalism: Exposing the Spirit of Our Age.
Back