Skip to main content
The Books of Nahum, Habakkuk, and Zephaniah: New International Commentary on the Old Testament
By: Thomas Renz
Stock No: WW826268 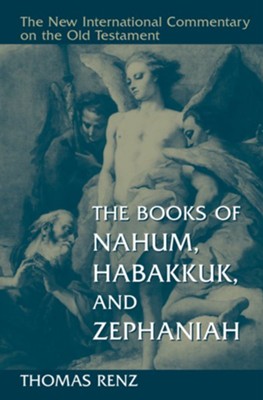 The Books of Nahum, Habakkuk, and Zephaniah: New International Commentary on the Old Testament

In this commentary, Thomas Renz reads Nahum, Habakkuk, and Zephaniah as three carefully crafted writings of enduring relevance, each of which makes a vital contribution to the biblical canon. Discussing the historical settings, Renz takes up both long-standing issues, such as the relationship of Zephaniah to Josiah’s reforms, and the socioeconomic conditions of the time suggested by recent archaeological research. The place of these writings within the Book of the Twelve is given fresh consideration, including the question of what one should make of the alleged redaction history of Nahum and Habakkuk.

The author’s careful translation of the text comes with detailed textual notes, illuminating some of the Bible’s most outstanding poetry (Nahum) and one of the biblical chapters that is among the most difficult to translate (Habakkuk 3). The thorough verse-by-verse commentary is followed by stimulating theological reflection, opening up avenues for teaching and preaching from these prophetic writings. No matter their previous familiarity with these and other Minor Prophets, scholars, pastors, and lay readers alike will find needed guidance in working through these difficult but important books of the Bible.

▼▲
Thomas Renz is the rector of Monken Hadley, a parish within the Church of England. Previously, he taught Old Testament and Hebrew at Oak Hill Theological College, a seminary in North London.

▼▲
"With a lifetime of investment in studying the main critical issues, Renz has produced a learned and judicious commentary on three prophetic books. He is aware of more recent efforts to think of the Twelve as a whole, and the contribution of these three books in that same context, though he is cautious about preserving their individual character. This is a commentary with technical expertise and pastoral sensitivity. An impressive contribution to the well-regarded NICOT series."
— Christopher Seitz
Wycliffe College, University of Toronto

"I can highly recommend this carefully researched, well-rounded, and comprehensive commentary. Its close attention to text-historical, text-critical, and literary issues makes this a very valuable addition to the scholarly library. Renz interprets the three books as distinct literary units which address matters of import for Judah living in the shadow of the Neo-Assyrian and Neo-Babylonian empires, yet he also explores their significance when read within the Book of the Twelve, the wider Protestant Canon, and later Christian reception."
— Lena-Sofia Tiemeyer
&Ouml;rebro School of Theology, Sweden

"Thomas Renz has written an outstanding commentary on Nahum, Habakkuk, and Zephaniah. Scholarly yet pastoral, thorough yet accessible; students and preachers of these books alike will be helped enormously. Renz doesn’t smother the text under a weight of detail but lets it live, explaining it lucidly and helping us see its trajectories for Christian thinking and application."
— Paul A. Barker
Old Testament lecturer and Assistant Anglican Bishop, Melbourne, Australia

"Renz’s commentary on Nahum, Habakkuk, and Zephaniah is amazingly meticulous and encyclopedic in its detailed attention to essential aspects of interpretation: text and translation, vocabulary and intertextual connections, poetic form and diction, compositional structure, reception-historical highlights, and profound reflection on theological implications that often extends into the New Testament—all of it clearly argued and exhaustively documented. This will become a standard reference work, especially for scholars, and also for pastors, theology students, and studious lay persons who seek to interpret the text from a perspective of faith."
— Michael H. Floyd
former president of the Anglican Association of Biblical Scholars

▼▲
I'm the author/artist and I want to review The Books of Nahum, Habakkuk, and Zephaniah: New International Commentary on the Old Testament.
Back
Back