The Mystery of History Volume 4: Wars of Independence to Modern Times
By: Linda Lacour Hobar 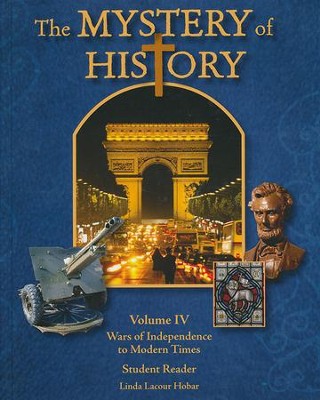 The Mystery of History Volume 4: Wars of Independence to Modern Times

Mystery of History Volume IV is the last and final volume of the Mystery of History series from Bright Ideas Press! Covering 1708 to 2014, it begins with Bach and Handel, brings the reader through multiple "wars of independence" as well as many "wars of ideologies" between Marxism, Darwinism, Fascism, and the Cold War. World War I and II bring the reader to more modern day conflicts, including a collapsed Soviet Union, a divided Korea, tension in the Middle East, and an ongoing War on Terror.

However, in addition to studying the violence of this era, the artists, inventors, writers, and humanitarians who contributed toward the "soul" of mankind over the last three centuries are also integrated. A world history text, Mystery of History 4 does cover important events in American history (though it cannot stand alone as an American history course), including the American Revolution, the War Between the States, the War in Vietnam, and the Civil Rights movement.

The last and final chapter looks at what is to come as outlined in the Book of Revelation. This section does not follow any single view of eschatology, but it will take students to the final chapters of Revelation, and its picture of the new heaven and new earth.

Volume IV is a hardcover volume that contains all of the lessons students are to read. It also contains a unique download code on the first page of the book to give access to the Companion Guide, which contains pretests, activities, quizzes, timeline directions, mapping exercises, and literature suggestions.

▼▲
I'm the author/artist and I want to review The Mystery of History Volume 4: Wars of Independence to Modern Times.
Back
×