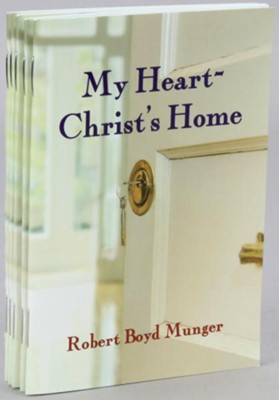 ▼▲
Whos that knocking at your door? Open it wide and welcome a special Guest into your heart. Imagining the heart as a house, Munger walks you through each room, encouraging you to surrender its contents - no matter how messy - to Jesus. A wonderful introduction to the Lordship of Christ! 28 pages each, five softcovers from InterVarsity.

▼▲
More than ten million readers have enjoyed Robert Boyd Munger's spiritually challenging meditation on Christian discipleship. Imagining what it would be like to have Jesus come to the home of our hearts, Munger moves room by room considering what Christ desires for us. In the living room we prepare to meet Christ daily. In the dining room we examine together what appetites should and should not control us. We even explore the closets in our lives that Christ can help us clean out. Munger's practical and profound booklet (now revised and expanded) helps you give Christ control over all of your life.

▼▲
Robert Boyd Munger, author of the best-selling book died February 16, 2001, at age 90. He earned degrees from the University of California at Berkeley, Princeton Theological Seminary and Whitworth College. Ordained as a United Presbyterian minister, he served as pastor of several congregations, including the First Presbyterian Church of Berkeley, California, where he first preached the sermon "My HeartChrist's Home." Munger also served for many years as a professor at Fuller Theological Seminary in Pasadena, California. His other books include and

▼▲
I'm the author/artist and I want to review My Heart - Christ's Home booklet, Pack of 5.
Back
Back