SHIPPING DELAYS & COVID-19 IMPACT - learn more
CYBER WEEK SALE: Up to 85% off, thru 12/7. >
My First Book of Chinese Calligraphy
By: Guillaume Olive, Zihong He 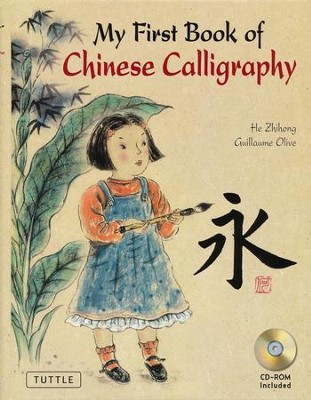 My First Book of Chinese Calligraphy

▼▲
My name is Mimi, I'm eight years old, and I'm learning calligraphy! A fun and engaging way to learn, My First Book of Chinese Calligraphy is an excellent introduction to China and one of China's most recognizable arts for young people. Join Mimi as she takes the first steps towards learning this magical art. Dive in, and explore:

▼▲
My First Book of Chinese Calligraphy is a fun and engaging introduction to one of China's most popular arts and crafts for kids. Calligraphy—the art of producing decorative handwriting or lettering with a pen or brush—has been around for thousands of years. In this fun calligraphy for kids book, readers will follow along with Mimi, an eight year old, who takes her first steps towards learning this magical art. Dive in, and explore:
The included interactive CD-ROM enables learners to play creative games to see, hear and try Chinese writing; listen to the pronunciation of the Chinese characters; observe calligraphers in action and print the characters to create practice pages.

▼▲
Zhihong He graduated from Beijing Academy of Fine Arts, where she studied traditional Chinese painting. She has authored and/or illustrated many children's books, including Long-Long's New Year for which she won the Peter Pan Award. She has also won the Saint-Exupery Prize.

Guillaume Olive is a Sinologist who spent many years in China. He is the author of several translations of Chinese folkloric tales, ancient poems and classic novels, as well as children's books published in his native France. He has received many prizes for his work, including the Nuit du Livre award and Saint-Exupery Prize.

▼▲
"A comprehensive review of the art of calligraphy (decorative handwriting) that also provides hands-on exercises and instructions for your budding calligrapher&hellip;The book celebrates the beauty of writing beyond alphabets and writing as an art form and a meditative practice. Beautiful color ink wash illustrations throughout the book provide a lush and contemplative feel, and an included CD provides more information beyond the text. Anyone with an interest in art, language, or China will find this book a valuable and rich resource." —Asian Fortune News

▼▲
I'm the author/artist and I want to review My First Book of Chinese Calligraphy.
Back
×
Back
×