My Bondage and My Freedom - eBook
By: Frederick Douglas 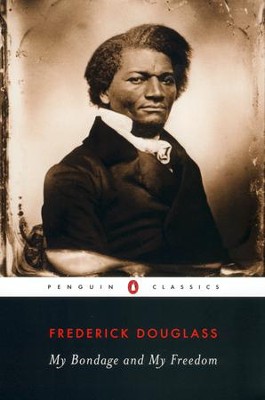 My Bondage and My Freedom - eBook

▼▲
My Bondage and My Freedom represents ten years of Frederick Douglass' reflections following his legal emancipation in 1846, and captipulted him into the spotlight as the foremost spokesman for American blacks--free and slave. 364 pages, softcover.

▼▲
“My Bondage and My Freedom,” writes John Stauffer in his Foreword, “[is] a deep meditation on the meaning of slavery, race, and freedom, and on the power of faith and literacy, as well as a portrait of an individual and a nation a few years before the Civil War.” As his narrative unfolds, Frederick Douglass—abolitionist, journalist, orator, and one of the most powerful voices to emerge from the American civil rights movement—transforms himself from slave to fugitive to reformer, leaving behind a legacy of social, intellectual, and political thought. Set from the text of the 1855 first edition, this Modern Library Paperback Classic includes Douglass’s original Appendix, composed of excerpts from the author’s speeches as well as a letter he wrote to his former master.

▼▲
John Stauffer is the author of The Black Hearts of Men, which won the Avery O. Craven Award, and was co-winner of the Frederick Douglass Book Prize and runner-up for the Lincoln Prize. He is the John L. Loeb Associate Professor of the Humanities at Harvard University and lives in Cambridge.

▼▲
“My Bondage and My Freedom, besides giving a fresh impulse to antislavery literature, [shows] upon its pages the untiring industry of the ripe scholar.”—William Wells Brown

▼▲
I'm the author/artist and I want to review My Bondage and My Freedom - eBook.
Back
×
Back
×