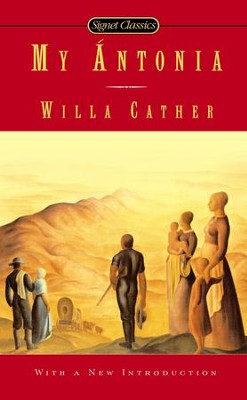 ▼▲
In this symphonically powerful novel, Willa Cather created one of the most winning heroines in American fiction, a woman whose robust high spirits and calm, undemonstrative strength are emblematic of the virtues Cather most admired in her country.

Antonia Shimerda is the daughter of Bohemian immigrants struggling with the oceanic loneliness of life on the Nebraska prairie. Through the eyes of Jim Burden, her tutor and disappointed admirer, we follow Antonia from farm to town and through hardships both natural and human, surviving everything from poverty to a failed romance--and not only surviving, but triumphing. In the end, Antonia is exactly what Burden says she is: a woman who "had that something which fires the imagination, [a woman who] could stop . . . one's breath for a moment by a look or a gesture that somehow revealed the meaning in common things."

▼▲
Willa Cather (1873–1948) was born in Winchester, Virginia. Her family moved to Nebraska before she was ten. During her teens she learned both Latin and Greek; she graduated from the University of Nebraska in 1895. She then taught high school, worked for the Pittsburgh Leader, and spent a good deal of time traveling. The Troll Garden (1905) was her first volume of short stories, and it was followed by her appointment as associate editor of McClure’s Magazine. She continued in this position for six years, but resigned in 1912 because she felt that the work for the magazine was interfering with her writing. Alexander’s Bridge, a short novel set in Boston, was published in the same year. In O Pioneers! (1913), she turned to her greatest subject, immigrant life on the Nebraska prairies, and established herself as a major American novelist. O Pioneers! was followed by more novels, including My &Aacute;ntonia (1918), The Professor’s House (1922), and Death Comes for the Archbishop (1927). Cather lived in New York for many years, and she was a familiar figure in intellectual and literary circles. The Old Beauty and Others, a collection of short stories, was published posthumously.

Marilyn Sides is the author of a collection of short stories, The Island of the Mapmaker's Wife and Other Tales, and of a novel, The Genius of Affection. She teaches literature and fiction writing at Wellesley College.

Terese Svoboda is the author of fourteen books of prose and poetry, including Bohemian Girl. Her work has appeared in the New Yorker, the Atlantic, Yale Review, Poetry, Bomb, Paris Review, Harvard Review, Narrative, and many other magazines. She received a Guggenheim in 2013.

▼▲
“No romantic novel ever written in America, by man or woman, is one half so beautiful as My Ántonia.” –H. L. Mencken

“The time will come when Willa Cather will be ranked above Hemingway.” –Leon Edel

▼▲
I'm the author/artist and I want to review My Antonia (Repackaged) - eBook.
Back
×
Back
×