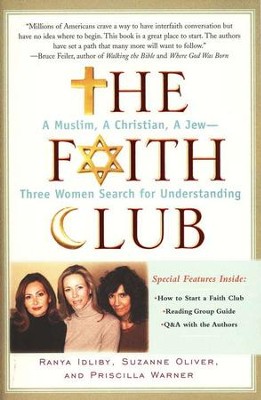 The Faith Club: A Muslim, A Christian, A Jew-Three Women Search For Understanding

▼▲
In The Faith Club three different women from three different faiths - A Muslim, A Christian, and A Jew - search for common ground and understanding. The authors wrestle with the issues of anti-Semitism, prejudice against Muslims, and preconceptions of Christians at a time when fundamentalists dominate the public face of Christianity. They write beautifully of their families, their losses and grief, their fears and hopes for themselves and their loved ones. And as the authors reveal their deepest beliefs, readers watch the blossoming of a profound interfaith friendship and the birth of a new way of relating to others.

In a final chapter, they provide detailed advice on how to start a faith club: the questions to ask, the books to read, and most important, the open-minded attitude to maintain in order to come through the experience with an enriched personal faith and understanding of others.

▼▲
A groundbreaking book about Americans searching for faith and mutual respect, The Faith Club weaves the story of three women, their three religions, and their urgent quest to understand one another.

When an American Muslim woman befriends two other mothers, one Jewish and one Christian, they decide to educate their children about their respective religions. None of them guessed their regular meetings would provide life-changing answers and form bonds that would forever alter their struggles with prejudice, fear, and anger. Personal, powerful, and compelling, The Faith Club forces readers to face the tough questions about their own religions.

Pioneering, timely, deeply thoughtful, and full of hope, The Faith Club’s caring message will resonate with people of all faiths.

▼▲
Ranya Idliby was raised in Dubai and McLean, Virginia. She holds a bachelor of science from Georgetown University's School of Foreign Service, and earned her MS in international relations from the London School of Economics. She lives in New York City with her husband and two children.

Suzanne Oliver was raised in Kansas City, Missouri, and has worked as a writer and editor at Forbes and Financial World magazines. She graduated from Texas Christian University and lives in New York City and Jaffrey Center, New Hampshire, with her husband and three children.

Priscilla Warner grew up in Providence, Rhode Island, graduated from the University of Pennsylvania, and spent many years in Boston and New York as an advertising art director, shooting ads for everything from English muffins to diamond earrings. Priscilla co-authored The New York Times bestselling memoir The Faith Club, then toured the country for three years, hyperventilating her way through an extended book tour. Finally, in the skies over Oklahoma, she vowed to find her inner monk, and began meditating her way from panic to peace.

▼▲
"Millions of Americans crave a way to have interfaith conversation but have no idea where to begin. This book is a great place to start. The authors have set a path that many more will want to follow." -- Bruce Feiler, author of Walking the Bible and Where God Was Born
"More Fight Club than book club, the coauthors pull no punches; their outstanding honesty makes for a page-turning read, rare for a religion nonfiction book...almost every taboo topic is explored on this engaging spiritual ride." -- Publishers Weekly

▼▲
I'm the author/artist and I want to review The Faith Club: A Muslim, A Christian, A Jew-Three Women Search For Understanding.
Back
Back