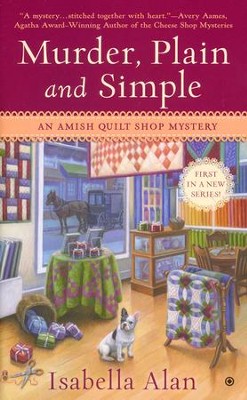 ▼▲
Angela Braddock finally has reason to leave behind her job as an advertising executive in Dallas, but she never imagined that she's wind up back in the middle of Ohio's Amish country as the owner of her late aunt's beautiful quilt shop, Running Stitch. With the help of her aunt's Amish friends, Angela is ready to re-open the store by throwing a party in honor of her aunt. Dozens of people gather, Englisch and Amish alike, but not all are happy about her opening. Joseph Walker, the talented woodworker who owns the furniture store next door, feels that she has no business specializing in a distinctively Amish trade and makes his feelings known. Then he winds up dead the next day right in Angela's shop, with her as the prime suspect.

When Angela Braddock inherits her late aunt’s beautiful Amish quilt shop, she leaves behind her career and broken engagement for a fresh start in Holmes County, Ohio.

With her snazzy cowboy boots and her ornithophobic French bulldog, Angie doesn’t exactly fit in with the predominantly Amish community in Rolling Brook, but her aunt’s quilting circle tries to make her feel welcome as she prepares for the reopening of Running Stitch.

On the big day, Angie gets a taste of success as the locals and Englisch tourists browse the store’s wares while the quilters stitch away. But when Angie finds the body of ornery Amish woodworker Joseph in her storeroom the next morning, everything starts falling apart.

With evidence mounting against her, Angie is determined to find the culprit before the local sheriff can arrest her. Rolling Brook always appeared to be a simple place, but the closer Angie gets to the killer, the more she realizes that nothing in the small Amish community is as plain as it seems....

▼▲
Isabella Alan is the national bestselling author of the Amish Quilt Shop Mysteries, including Murder, Handcrafted; Murder, Plainly Read; Murder, Served Simply; Murder, Simply Stitched; and Murder, Plain and Simple. An academic librarian for a small college in Ohio, she grew up visiting the state’s Amish country with her family. As Amanda Flower, she is the author of the Agatha Award–nominated Maid of Murder as well as the Magical Bookshop Mysteries.

▼▲
"Isabella Alan captures Holmes County and the Amish life in a mystery that is nothing close to plain and simple, all stitched together with heart." –Avery Aames, Agatha Award-Winning author of the Cheese Shop mysteries

“Who can best run a quilt shop in Holmes County’s Amish country – an English outsider, or only the Amish themselves? With its vast cast of English and Amish characters in fictional Rolling Brook, Ohio, Isabella Alan’s Murder, Plain and Simple will be a dead certain hit with devotees of cozy mysteries.” –P.L. Gaus, author of the Amish Country mysteries

▼▲
I'm the author/artist and I want to review Murder, Plain and Simple, Amish Quilt Shop Mystery Series #1.
Back
Back