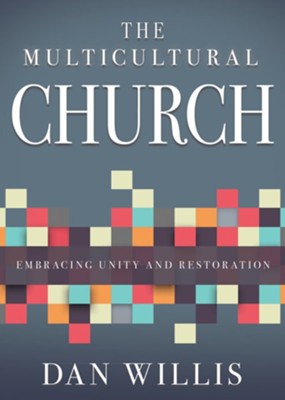 ▼▲
Despite the progress our country has made in Civil Rights over the past century, Sunday morning is still one of the most segregated times in America. It seems like the only people striving to lead in the area of racial reconciliation are politicians, activists, and celebrities. Pastor Dan Willis wants to know... Where is the church? What can the people of God do to become leaders again and not just be Johnny-come-lately followers? The art of bringing harmony to the masses lies in the love all should see in the church of God. If the church is to make a difference and return to relevance in this world, the only option is multicultural ministry. If leaders are not prepared to minister to this growing culture, then American Christianity is in danger of becoming nonessential to the body of believers. For years, Dan Willis has led a growing, multicultural Christian community in the suburbs of Chicago. In The Multicultural Church, Dan shares what he has learned, the mistakes he has made, and what can be done to successfully minister to a diverse culture.

▼▲
As a boy, Dan Willis dreamed of becoming a neurosurgeon until the fateful day when, at age sixteen, he was called to "temporarily" take over as pastor of a local church. Dan took that small ministry of sixteen people and nurtured it into the largest multicultural church on the south side of Chicago, consisting of over five thousand members. Today, Dan still serves as senior pastor of The Lighthouse Church of All Nations, in Alsip, Illinois. The driving force of Dan’s ministry has always been one of uniting the races. To look out over the congregation during a typical worship celebration, you will see men, women, and children from over seventy-two different nations. Dan is also a gifted singer, musician, and producer. He founded a community choir called The Pentecostals of Chicago, bringing together black, white, Hispanic, and Asian singers from over twenty Chicago area churches. This group, now known as The All Nations Choir, has six albums to its credit and has performed with artists from Celine Dion to Kirk Franklin, and has served on missionary trips to the orphanages of Kingston, Jamaica.
A celebrated television host, he created and hosted the Emmy-nominated shows Inspiration Sensation and I’m Just Sayin’. Dan has traveled the country ministering and teaching men and women through the Starting Line Prison Fellowship organization and has also been a national and international speaker on the topics of music, ministry, racial reconciliation, leadership, and community development. Dan is the author of Freedom to Forget and most recently, Praise Is My Weapon. Dan continues to live in Alsip with his wife, Linda, and is father to four grown children and eight grandchildren.

▼▲
I'm the author/artist and I want to review The Multicultural Church: Embracing Unity and Restoration.
Back
×