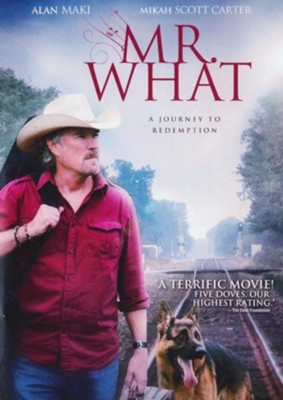 Mr. What: A Journey to Redemption, DVD

Named for the question Mattiesko Wuopio gets every time he says his name, Mr. What has spent 22 years in prison for a crime he didn't commit. Upon apprehension of the true culprit, he's released, only to face harassment and the jailbird stigma as he attempts to re-enter society in tiny Tecumseh, Michigan.

Meanwhile, Mr. What seeks redemption through his ailing father, who is beset with Alzheimer's disease, a neighbor boy without friends or a father who cares, and a stray dog. In the end, a miracle proves that God is never far out of reach for those in need of a little healing. Dove approved (12+). Closed captioned. Approx. 91 minutes.

Tell us a little about yourself.  I've been a pastor for 28 years, and during that time I've written two Christian novels for B&H Publishing and I've written, produced and starred in two feature length movies. "Mr. What" is the 2nd film, and I'm very proud to be a part of it. I've been married for 35 years, and my wife and I have three children and two grandchildren. I hope you'll find it interesting that I've run three marathons, rode a bicycle across America, and once-upon-a-time I broke the Guinness World Record for balancing on one foot (done to raise monies for crippled children and kids with cancer).

What was your motivation behind this project?  I wanted to write a screenplay filled with hope, reconciliation, redemption and encouragement. I wanted to create an ending to the film that would uplift the audience and make them feel good about life. Along with that, I simply wanted to create a family-approved story and vehicle that my son, Shaun, would want to direct and film, as he is the most talented person I know. I believed that he would bring all the nuances of the script to life on the screen, and he has certainly accomplished that. Also, I love involving family and friends in projects such as this one, and to see them succeed so wonderfully well is really rewarding. In short, I hoped that thousands of people would benefit in one way or another from this project.

What do you hope folks will gain from this project?  Since this is truly a family movie with Christian values, I wanted to give people something beautiful and uplifting in contrast to a world filled with evils that we see and hear about seemingly every day. I wanted to give folks some peace and love and respite by putting some warmth and kindness on the screen. I'd love to be responsible for putting a big smile on people's faces!

How were you personally impacted by working on this project?  Working on a film with members of my own family and my church family always has a big impact on me, increasing our closeness as we seek to accomplish "something big" together. Obviously, I worked very closely with my son Shaun as he filmed and directed the movie, and acting alongside my grandson, Mikah Scott Carter, was inspiring, to say the least. Mikah is an exceptional actor, as people who watch "Mr. What" will discover. Also, the thrill of receiving Five Doves from The Dove Foundation always carries an important impact, and the worldwide distribution from Bridgestone Multimedia Group has an impact beyond belief! I'm humbled and blessed -- let's put it that way!

Anything else you'd like readers / listeners to know:  "Mr. What" grabbed some awards that are notable: Best Original Screenplay from Churches Making Movies Christian Film Festival in New Jersey; Nominated for the Spirit Award at the same festival; and Finalist for Best Drama Feature at the International Family Film Festival in Hollywood. Please get a DVD of "Mr. What" and contact me with your feelings about the movie on our website at mrwhatmovie.com. I'd love to hear from you!