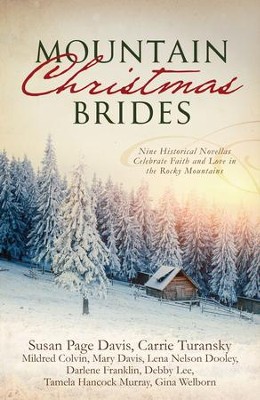 Mildred Colvin is the author of more than thirty romance novels in both contemporary and historical time settings, including the best seller "Mama’s Bible" which is the first in a series of Oregon Trail stories. She is a member of American Christian Fiction Writers as well as a wonderful critique group. Mildred often sets her stories in her home state of Missouri where she lives with her husband of almost fifty years. They have three adult children and three grandchildren.

Mary Davis is an award-winning author of over a dozen novels in both historical and contemporary themes, four novellas, two compilations, and three short stories, as well as being included in various collections. She is a member of American Christian Fiction Writers and is active in two critique groups. Mary lives in the Colorado Rocky Mountains with her husband of over thirty years and two cats. She has three adult children and one grandchild. She enjoys playing board and card games, rain, and cats. She would enjoy gardening if she didn’t have a black thumb. Her hobbies include quilting, porcelain doll making, sewing, crafts, crocheting, and knitting.

Susan Page Davis is the author of more than sixty Christian novels and novellas, which have sold more than 1.5 million copies. Her historical novels have won numerous awards, including the Carol Award, the Will Rogers Medallion for Western Fiction, and the Inspirational Readers Choice Contest. She has also been a finalist in the More than Magic Contest and Willa Literary Awards. She lives in western Kentucky with her husband. She's the mother of six and grandmother of ten.

Darlene Franklin is a bestselling author. Her greatest claim to fame is that she writes full-time from a nursing home. She lives in Oklahoma, near her son and his family, and continues her interests in playing the piano and singing, books, good fellowship, and reality TV in addition to writing. She is an active member of Oklahoma City Christian Fiction Writers, American Christian Fiction Writers, and the Christian Authors Network. She has written over fifty books and more than 250 devotionals. Her historical fiction ranges from the Revolutionary War to World War II, from Texas to Vermont.

Debby Lee was raised in the cozy little town of Toledo, Washington. She has been writing since she was a small child, and has written several novels, but never forgets home. The Northwest Christian Writers Association and Romance Writers of America are two organizations that Debby enjoys being a part of. As a self professed nature lover, and an avid listener of 1960's folk music, Debby can't help but feel like a hippie child who wasn't born soon enough to attend Woodstock. She wishes she could run barefoot all year long, but often does anyway in the grass and on the beaches in her hamlet that is the cold and rainy southwest Washington. During football season, Debby cheers on the Seattle Seahawks along with legions of other devoted fans. She's also filled with wanderlust and dreams of visiting Denmark, Italy, and Morocco someday.

Tamela Hancock Murray is the author of over thirty novels and nonfiction works. She feels honored and humbled that her books have placed her on bestseller lists and that one of her Barbour titles, Destinations, won an RWA Inspirational Readers Choice Award. Tamela has been a literary agent since 2001 and is with The Steve Laube Agency. She lives in Virginia with her husband of over thirty years. They are the parents of two lovely daughters, enjoys church, reading, and spending time with her immediate and extended family and friends.Tamela is passionate about edifying and encouraging other Christians through her work. She always enjoys hearing from readers. ​

Carrie Turansky is an award-winning author of more than a dozen novels and novellas. She has been the winner of the ACFW Carol Award, the Crystal Globe Award, and the International Digital Award, and a finalist for the Inspirational Readers Choice Award and the ACFW Carol Awards and Genesis Contest. She has written contemporary and historical romances, women's fiction, short stories, articles, and devotionals. She lives in New Jersey with her husband, Scott, and they have five adult children and four grandchildren.

Gina Welborn is an ECPA- bestselling author worked for a news radio station until she fell in love with writing romances. She serves on the American Christian Fiction Writers Foundation Board. Sharing her husband's love for the premier American sportscar, she is a founding member of the Southwest Oklahoma Corvette Club and a lifetime member of the National Corvette Museum. Gina lives with her husband, three of their five Okie-Hokie children, two rabbits, two guinea pigs, and a dog that doesn't realize rabbits and pigs are edible.

▼▲
I'm the author/artist and I want to review Mountain Christmas Brides: Nine Historical Novellas Celebrate Faith and Love in the Rocky Mountains - eBook.
Back
×
Back
×