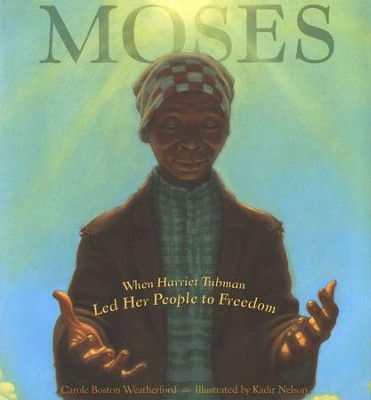 Moses: When Harriet Tubman Led Her People to Freedom

▼▲
Evocative and rich in both tone and style, this beautifully illustrated book follows Harriet Tubman on her first trip to Freedom as she escapes north on the Underground Railroad. The lyrical text gives meaning not only to her physical journey to freedom, but her spiritual journey as well as she draws upon God for comfort, subsistence and help to guide her along each step of the way. Haunting and soothing simultaneously, the gorgeous illustrations and swirling poetry will surely make this book a favorite. 44 pages, reinforced binding; hardcover with dust jacket. Ages 5-8.

▼▲
A Caldecott Honor Book
A Coretta Scott King Award Winner
In this award-winning book, acclaimed author Carole Boston Weatherford and bestselling artist Kadir Nelson offer a resounding, reverent tribute to Harriet Tubman, the woman who earned the name Moses for her heroic role in the Underground Railroad.
I set the North Star in the heavens and I mean for you to be free...
Born into slavery, Harriet Tubman hears these words from God one summer night and decides to leave her husband and family behind and escape. Taking with her only her faith, she must creep through woods with hounds at her feet, sleep for days in a potato hole, and trust people who could have easily turned her in. But she was never alone.
In lyrical text, Carole Boston Weatherford describes Tubman's spiritual journey as she hears the voice of God guiding her north to freedom on that very first trip to escape the brutal practice of forced servitude. Tubman would make nineteen subsequent trips back south, never being caught, but none as profound as this first one. Courageous, compassionate, and deeply religious, Harriet Tubman, with her bravery and relentless pursuit of freedom, is a testament to the resilience of the human spirit.

▼▲
Carole Boston Weatherford has written more than fifty books, including the Caldecott Honor recipients Freedom in Congo Square; Voice of Freedom: Fannie Lou Hamer, Spirit of the Civil Rights Movement; and Moses: When Harriet Tubman Led Her People to Freedom. She won a Coretta Scott King Author Honor for Becoming Billie Holiday, NAACP Image Awards for Moses and for Gordon Parks: How the Photographer Captured Black and White America, the Arnold Adoff Poetry Award for The Legendary Miss Lena Horne, and an SCBWI Golden Kite and We Need Diverse Books Walter Award for Schomburg: The Man Who Built a Library. Baltimore-born, Weatherford teaches at Fayetteville State University in North Carolina.
Kadir Nelson is the Caldecott Medal-winning artist of The Undefeated and a two-time Caldecott Honor recipient for Moses: When Harriet Tubman Led Her People to Freedom by Carole Boston Weatherford and Henry's Freedom Box by Ellen Levine. Among his numerous other awards are three NAACP Image Awards, two Coretta Scott King Author Awards, and three Coretta Scott King Illustrator Awards. His work has appeared in many publications including The New York Times, Sports Illustrated, and The New Yorker, and his paintings are in the private and public permanent collections of notable institutions across the country, including the Smithsonian National Portrait Gallery and National Museum of African American History and Culture in Washington D.C.; The National Baseball Hall of Fame in Cooperstown; the International Olympic Committee, and the US House of Representatives. Kadir lives with his wife is Southern California, and invites you to visit him at www.kadirnelson.com.

▼▲
It's unfortunate that this book is shelved in the children's department in most bookstores, because I'm in my 50s and this ranks among my favorite inspirational books in recent years.
I think author Carole Boston Weatherford, a children's author who has family roots in the same Maryland county where Harriet Tubman was born, may be somehow channeling this hero of the Underground Railroad. Her text is lyrical and allows us to dream and pray and hope along with Tubman as we read.
The lyrical power of the book owes a great deal, though, to the moving illustrations by Kadir Nelson that take Tubman from a little girl looking at the night sky to the spiritual powerhouse who we remember today.
Even if you don't have children at home, buy this book and find some children who need to experience this story. I've used the book with adults as well and they enjoy it as much as youngsters.

▼▲
I'm the author/artist and I want to review Moses: When Harriet Tubman Led Her People to Freedom.
Back
Back