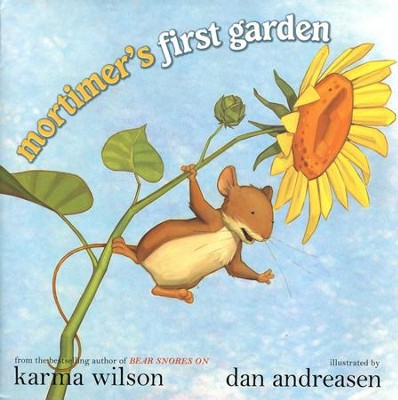 ▼▲
Little Mortimer Mouse munches on sunflower seeds as he looks at the brown world around him. Winter is just over, and he longs to see some green! He overhears the humans of the house talking about gardening, and how springtime rain and sunshine nurture little seeds to grow into great big green plants. He laughs, skeptical that big plants can come from little seeds. But he decides to plant one of his seeds, just to see if such a miracle really can happen. He waits. And waits. Just when he thinks that nothing is going to happen, something does happen--something green! Celebrate the miracle of springtime with little Mortimer Mouse. Recommended for ages 4 to 8.

▼▲
Winter is just over, the sky is gray, and the ground is brown. Little Mortimer Mouse munches on sunflower seeds and longs to see something green.

Upon overhearing the story of how springtime rain and sunshine nurture little seeds to grow into great big green plants, Mortimer is skeptical but decides to plant one of his seeds, just to see if such a miracle really can happen. Mortimer finds a perfect sport to plant the seed, and then...he waits.

Impatient, Mortimer thinks nothing is ever going to happen to the little seed. But then something does happen. Something wonderful. Something divine. Something green!

First introduced in the bestselling Mortimer's Christmas Manger, Mortimer Mouse returns with gutso in this inspirational offering that celebrates the miracle of springtime.

▼▲
Karma Wilson is the bestselling author of several picture books, including the Bear Books series, Where Is Home, Little Pip?, and A Dog Named Doug. Karma lives in Montana.

Dan Andreasen is the illustrator of numerous picture books, including By the Dawn’s Early Light: The Story of the Star-Spangled Banner by Steven Kroll, which was named an ABA Kids’ Pick of the Lists and a Notable Children’s Trade Book in the Field of Social Studies; A Quiet Place by Douglas Wood; and Sailor Boy Jig by Margaret Wise Brown. He has also authored several picture books, including With a Little Help from Daddy and A Special Day for Mommy. Dan lives with his family in Medina, Ohio.

▼▲
I'm the author/artist and I want to review Mortimer's First Garden.
Back
Back