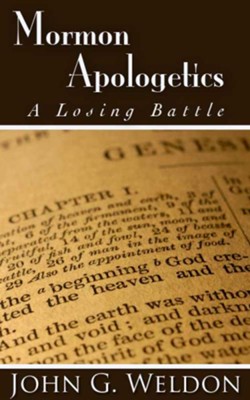 ▼▲
In recent years Mormons have significantly increased their scholarly apologetic effort (defending their faith). This book for laymen attempts to examine LDS apologetics to see if they make their case. Defending Mormonism historically, theologically, philosophically, textually, archaeologically, scientifically and in other ways is a tall order, as readers will see. In fact, it is an impossible task. This is important because there are over 14 million baptized members of the Mormon church today. In addition, Mormonism (officially known as the Church of Jesus Christ of Latter-day Saints) is highly evangelistic with some 60,000 missionaries around the world. Mormonism looks great on the outside, but unfortunately, it's another story on the inside. (As a result, the exodus from the Mormon church is also increasing, as more and more Mormons learn the truth about their religion.) Mormonism claims to constitute an authentic divine revelation; to be a genuine Christian religion (actually the only true Christian religion on earth); to believe in Jesus Christ and the Bible and in salvation by grace and to have truth on its side. Because of such claims, most people in general believe Mormonism is a genuine Christian religion and over 30% of evangelical Christians believe so. Mormon apologetics seeking to defend their faith far transcends members of the Mormon church itself. In fact, in part because of the deception, Mormonism plucks most of its converts from the pews of Catholicism and Protestantism. Critically examining one's own religion can be difficult because so much is at stake personally, in this life alone. But it is also absolutely necessary, no matter what the cost here, because so much more is at stake in the next life. In the end, to be found to be wrong about God, the most important subject in the universe, and to have promoted such error, carries eternal weight as to its consequences (Matthew 25:46).

▼▲
I'm the author/artist and I want to review Mormon Apologetics: A Losing Battle - eBook.
Back
×
Back
×