Skip to main content
SPRING CYBER EVENT STARTS NOW: And it's a really BIG deal! Up to 88% off through 5/24>
More than Conquerors, Extreme Devotions Series #2
By: Kathi Macias
Stock No: WW692831 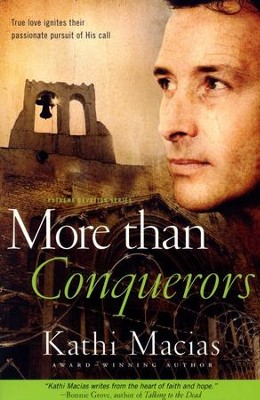 ▼▲
More than Conquerors takes place in Tijuana and Chiapas, Mexico. With violent crime on the rise and the political climate changing throughout Mexico, Pastor Hector Rodriguez finds himself at odds with his own Christian teachings when murder threatens the sanctity and safety of his own family.

▼▲
True love ignites their passionate pursuit of His call With violent crime on the rise and the political climate changing throughout certain parts of Mexico, the opportunity for open Christian witness, particularly in some areas of Chiapas State, is rapidly decreasing. Hector Rodriguez pastors a small church in the tourist-popular border town of Tijuana. He also routinely carries Bibles deeper into the hostile areas of Mexico, where he ministers despite increasing difficulty and persecution. Hector’s mother accompanied him on one of those trips and felt God called her to stay in the little village of San Juan Chamula, where she uses the Scriptures to teach reading to the families who are open to it. In retaliation for Hector’s bringing the Bibles into areas hostile to Christians and in an effort to dissuade him from continuing to expand his ministry there, Hector’s mother is murdered. Hector must decide if he will continue his work despite his worries about protecting his wife and children.

▼▲
Award-winning author Kathi Macias has written more than 17 books, including Beyond Me, the best-selling devotional A Moment a Day, and the popular “Matthews” mystery novels. Her most recent novel, Emma Jean Reborn, is currently being put into script form

▼▲
The main theme of More Than Conquerors by Kathi Macias is that even when circumstances are absolutely horrid, Christians should make a full effort to be God-honoring, strong, and noble. The story focuses on a young American named Marty, who holds a degree in biblical studies but is unsure of what calling God has for his life. He is impressed when he learns of the work being done by Melina in the poor village of San Juan Cahmula and nearby Tiajuana, as she works to teach the local women how to read books and write the alphabet. These women had long since been persecuted, held back socially and educationally and financially, sometimes even treated with violence if they show any streak of independence.

When Marty decides to help Melina and her husband Hector in the work of guiding the poor village women in how to become educated and independent, he realizes that he is putting his life on the line. And, indeed, the plot reveals plans to kill Marty and others involved in the underground school. A subplot focuses on a grandmother who is trying to be a positive influence on her grandson, showing him Christian values in an effort to keep him out of gangs and away from the drug culture. Sadly, the result is violence rather than repentance. The book is often graphic and direct in explaining the violence in these border towns, and, thus, is not recommended for readers under age 16.

Marty is persecuted, yet amidst it all he feels that he is in the center of Gods will, for he is ministering to the poor and wretched, much the way Jesus did in his earthly ministry. Hector symbolically adopts him into the family. The book incorporates words in Spanish, but because they are in context, the words add to the flavor of the locale without confusing the readers of meaning or intent.

Christians who wish to expand their worldview or anyone considering a life in missions will find this book insightful, challenging, and stunning.  Juan Comboni, www.ChristianBookPreviews.com

▼▲
I'm the author/artist and I want to review More than Conquerors, Extreme Devotions Series #2.
Back
Back