Skip to main content
The Rise of Moralism: The Proclamation of the Gospel from Hooker to Baxter
By: C. FitzSimons Allison
Stock No: WW832573 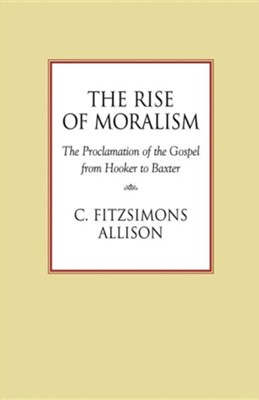 The Rise of Moralism: The Proclamation of the Gospel from Hooker to Baxter

▼▲
During the seventeenth century, a remarkable change took place in Anglican theology. FitzSimons Allison describes a unique consensus that emerged in the century's early years through the labors of such seminal theologians as Hooker, Andrewes, Donne, and Davanant. Their difficult task was to outline an English theology to be distinguished from Trent on the one hand, and the increasingly aggressive Reformed continental theologies on the other. That they managed a clear, creative, and comprehensive outlook while avoiding the excesses of Roman and Puritan theologies is no small accomplishment. With the later Carolines, notably Jeremy Taylor and Richard Baxter, there arose a theology whose generating principle was morality, quite unlike their immediate predecessors. This decisive transition, Allison argues, led to the Deism of the eighteenth century, and secularism of the twentieth. First published in 1966, this eloquent and level study provides a basis for understanding many modern dilemmas. The Rt. Rev. C. FitzSimons Allison is retired Bishop of the Episcopal Diocese of South Carolina. His other books include Guilt, Anger, and God and Fear, Love, and Worship.

▼▲
I'm the author/artist and I want to review The Rise of Moralism: The Proclamation of the Gospel from Hooker to Baxter.
Back