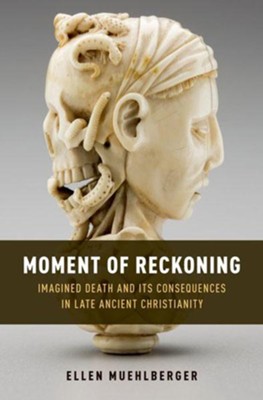 Moment of Reckoning: Imagined Death and Its Consequences in Late Ancient Christianity

By: Ellen Muehlberger
Oxford University Press / 2019 / Hardcover
Write a Review
Expected to ship on or about 04/25/20.
Email me when this product is available.
Stock No: WW459161

Late antiquity saw a proliferation of Christian texts dwelling on the emotions and physical sensations of dying, not as a heroic martyr in a public square or a judge's court, but as an individual, at home in a bed or in a private room. In sermons, letters, and ascetic traditions, late ancient Christians imagined the last minutes of life and the events that followed death in elaborate detail. The majority of these imagined scenarios linked the quality of the experience to the moral state of the person who died. Death was no longer the "happy ending," in Judith Perkins's words, it had been to Christians of the first three centuries, an escape from the difficult and painful world. Instead, death was most often imagined as a terrifying, desperate experience. This book is the first to trace how, in late ancient Christianity, death came to be thought of as a moment of reckoning: a physical ordeal whose pain is followed by an immediate judgment of one's actions by angels and demons and, after that, fitting punishment.

Because late ancient Christian culture valued the use of the imagination as a religious tool and because Christian teachers encouraged Christians to revisit the prospect of their deaths often, this novel description of death was more than an abstract idea. Rather, its appearance ushered in a new ethical sensibility among Christians, in which one's death was to be imagined frequently and anticipated in detail. This was, at first glance, meant as a tool for individuals: preachers counted on the fact that becoming aware of a judgment arriving at the end of one's life tends to sharpen one's scruples. But, as this book argues, the change in Christian sensibility toward death did not just affect individuals. Once established, it shifted the ethics of Christianity as a tradition.

This is because death repeatedly and frequently imagined as the moment of reckoning created a fund of images and ideas about what constituted a human being and how variances in human morality should be treated. This had significant effects on the Christian assumption of power in late antiquity, especially in the case of the capacity to authorize violence against others. The thinking about death traced here thus contributed to the seemingly paradoxical situation in which Christians proclaimed their identity with a crucified person, yet were willing to use force against their ideological opponents.

▼▲
Ellen Meuhlberger is Associate Professor of Christianity in Late Antiquity in the Departments of Near Eastern Studies and History at the University of Michigan. During the research for this book, she held of the Charles A. Ryskamp Research Fellowship (2014-15) and a National Endowment for the Humanities Fellowship (2016-17).

▼▲
"This methodologically sophisticated, lucidly written book will be important reading for advanced students of early Christianity." -- A. W. Klink, CHOICE
"Moment of Reckoning is an elegant and accessible book, which looks afresh at a cluster of ideas too easily taken for granted as basic to a Christian worldview. As an aside, it also has some of the most effective use of the first person I have seen in scholarly work. ... Like the late ancient Christian texts it so neatly analyses, Moment of Reckoning will encourage its readers to pay much more attention to expectations of death." -- Robin Whelan, Bryn Mawr Classical Review
"This brilliant, elegant, accessible, and important book brings into focus for the first time the part that the moment of death played in the imagination of late ancient Christians. In elucidating how explanations of that moment were indebted to ancient rhetorical technologies and concepts of the body as the locus of punishment, Muehlberger illuminates the role that imagining death played in forming a culture of coercion in Late Antiquity." --Elizabeth DePalma Digeser, Professor of History, University of UC Santa Barbara
"With Moment of Reckoning, Ellen Muehlberger has given us an enormously important addition to a rapidly expanding field. By analyzing the changing ways in which late ancient Christians imagined their death and thus an ideal (or not so ideal) future, Muehlberger traces shifting notions of who should belong to the Christian community and why; for example, it was beneficial to force others to join that community for the sake of their post-mortem future. A stunning achievement." --Susanna Elm, author of Sons of Hellenism, Fathers of the Church: Emperor Julian, Gregory of Nazianzus, and the Vision of Rome
"Death took a turn in late antiquity: beginning in the fourth century, Christians under the tutelage of their rhetorically sophisticated leaders visualized death as a new phase of their moral lives. In this lively and sensitive study, Muehlberger traces the roots and far-ranging implications of this deathly turn. Moment of Reckoning transforms our understanding of early Christian personhood and cautions nuance in the stories we tell about the past." --Andrew S. Jacobs, author of Epiphanius of Cyprus: A Cultural Biography of Late Antiquity

▼▲
I'm the author/artist and I want to review Moment of Reckoning: Imagined Death and Its Consequences in Late Ancient Christianity.
Back
×