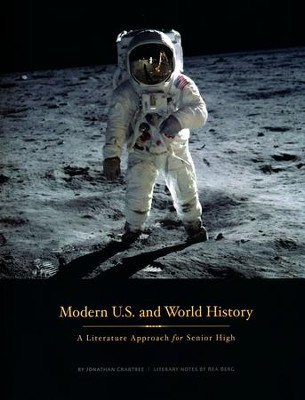 Covering 1850 to 2000, this Charlotte Mason-based guide will guide high school students through a study of the American Civil War, Reconstruction, the Industrial Revolution, WWI, Communism, WWII, the Korean War, the Cold War, the Vietnam War, the Civil Rights Movement, modern technology, the War on Terror, and more.

Based upon living books, students read literature (sold-separately) from great authors such as Stephen Crane, Jules Verne, Albert Marrin, Harper Lee, and others while following the convenient lesson plans. Chronolog ically-ordered lessons include easily-understood, numbered instructions on what to read and questions based upon the reading. Exercises help readers to learn history alongside an emphasis on critical thinking, analysis, and writing skills. Literary analysis assignments and notes for six of the required books are also included. Students will complete a separate notebook where their written exercises, essays, and reports are kept. This guide is designed as a 36-week course with 7 lessons every 2 weeks.

List of Literature used in this curriculum (must be obtained separately):

▼▲
I'm the author/artist and I want to review Modern U.S. and World History Study Guide.
Back
×
Back
×