Skip to main content
Get Christmas Ready Sale: Deals on over 1,150 titles thru 9/27.
Misunderstood Jew: The Church and the Scandal of the Jewish Jesus
By: Amy Jill Levine
Stock No: WW137785 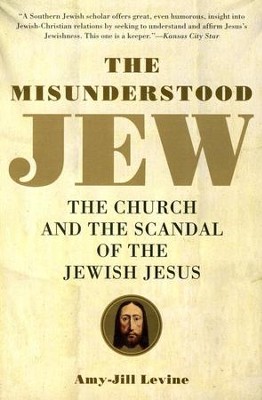 Misunderstood Jew: The Church and the Scandal of the Jewish Jesus

▼▲
Jesus Christ is Who Christianity is based on, but He was a practicing Jew during His life. Amy-Jill Levine was born into a Jewish home and now is the professor of New Testament Studies at Vanderbilt. Her focus and purpose in writing is to bridge the gulf between Christianity and Judaism by examining the Jesus of the Bible. On the one hand, there is Jesus the rabbi, whose wise words are seldom heard in modern synagogues; on the other hand there is Jesus the iconoclast, who upheld the Law of the Lord to the point of fulfilling it. In Levine's often humorous book, she attempts to pave a middle path, where understanding between the two traditions centers on the Jesus of her studies - an observant Jew Whose teachings should engender love of the Jewish people on the part of those who follow His way and Whose words should hold wisdom for those whose traditions He grew up in.

In the The Misunderstood Jew, scholar Amy-Jill Levine helps Christians and Jews understand the "Jewishness" of Jesus so that their appreciation of him deepens and a greater interfaith dialogue can take place. Levine's humor and informed truth-telling provokes honest conversation and debate about how Christians and Jews should understand Jesus, the New Testament, and each other.

Amy-Jill Levine is University Professor of New Testament and Jewish Studies and Mary Jane Werthan Professor of Jewish Studies at Vanderbilt Divinity School and Department of Jewish Studies. She has also taught at Swarthmore College, Cambridge University, and the Pontifical Biblical Institute in Rome. She is the author of many books, including The Misunderstood Jew and Short Stories by Jesus, and she is the co-editor of the Jewish Annotated New Testament. Professor Levine, who has done over 300 programs for churches, clergy groups, and seminaries, has been awarded grants from the Mellon Foundation, the National Endowment for the Humanities, and the American Council of Learned Societies. Institutions granting her honorary degrees include Christian Theological Seminary and the Episcopal Seminary of the Southwest.

▼▲
Written for the general reading public, this is an outstanding addition to the literature of interfaith dialogue.
Shows how frequently and disastrously inaccurate beliefs about Jesus and early Judaism produce distorted relationships in the present.
“Passionate, witty, and compelling . . . Levine’s depth of knowledge and understanding are evident on every page. . . . There is much food for thought in this wonderful book.”

▼▲
I'm the author/artist and I want to review Misunderstood Jew: The Church and the Scandal of the Jewish Jesus.
Back
Back