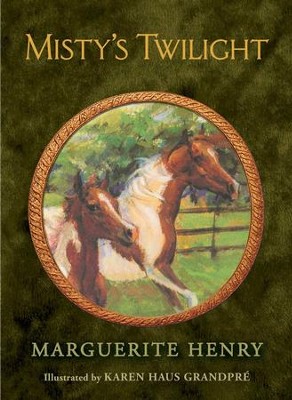 ▼▲
Misty’s Twilight is part thouroughbred, part Chinoteague pony, and one hundred percent fire and talent. A direct descendant of the most famous pony ever, Misty of Chinoteague, Twilight has greatness in her blood. Now it’s her turn to shine, perhaps as a cutting horse, a jumper, or in the graceful art of dressage.

Can Twilight, whose ancestors were wild ponies living on an untamed island, do it? Can she compete against the best horses in the world...and win?

▼▲
Marguerite Henry was the beloved author of such classic horse stories as King of the Wind, Misty of Chincoteague, and Stormy: Misty’s Foal, all of which are available in Aladdin paperback editions.

▼▲
I'm the author/artist and I want to review Misty's Twilight - eBook.
Back
Back