The Third Force in Missions: A Pentecostal Contribution to Contemporary Mission Theology
By: Paul A. Pomerville
Stock No: WW707689 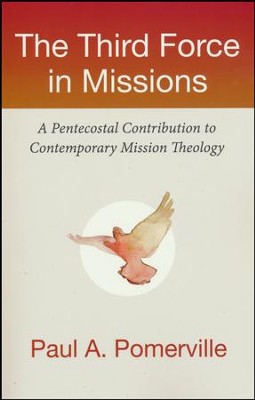 The Third Force in Missions: A Pentecostal Contribution to Contemporary Mission Theology

▼▲
The Third Force in Missions challenges readers to recognize the indispensable role of the Holy Spirit as power-for-mission. It confronts the Western mentality that ignores the miraculous in its missions strategy and the global Pentecostal movement. Paul Pomerville suggests that such activity - prompted and controlled by the Spirit - is key to fruitful biblical missions.

When The Third Force in Missions was first published in 1985, Paul Pomerville sought to draw attention to the Pentecostal contribution to missions. At that time, he argued there was an "information gap" regarding the size of this movement, in spite of "two waves" of worldwide Pentecostal renewal. He argued that this gap existed because of evangelical bias against Pentecostalism, bias against "charismatics" in mainline churches, ethnocentrism toward Pentecostals in the developing world, and faulty reporting.

Thirty years later, Pomerville once again argues the importance of the global Pentecostal movement, seeking to correct the ongoing tunnel vision of world missions programs, which since the Protestant Reformation have tended to ignore the Holy Spirit's work in today's missions. In this book, Pomerville exposes the serious methodological and theological flaws of such a one-sided position.

▼▲
Paul A. Pomerville (PhD, Intercultural Studies, School of World Mission, Fuller Seminary) served as a missionary to Asia and Europe, and as graduate professor and department chair of Christian Missions and Cross-Cultural Communications at the Assemblies of God Seminary. He has also trained police officers in cultural diversity around the world.

▼▲
I'm the author/artist and I want to review The Third Force in Missions: A Pentecostal Contribution to Contemporary Mission Theology.
Back
×
Back
×