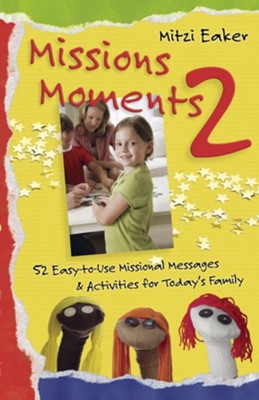 ▼▲
Help your children develop a biblical worldview and learn about missions with this easy-to-use resource. Designed for home or church use, it offers 52 weeks of age-appropriate 5-minute talks, 15-minute application activities, memory verses, and "Make It Home" challenges that get the entire family involved in bringing Christ's light to the world! 160 pages, softcover from New Hope.

▼▲
As mass media pushes a give me, give me mentality, many Christian parents struggle with helping their children understand the importance of missions and missional living. After all, with all of life’s demands, how can anyone find the time to teach their children about missions? In Missions Moments 2, Mitzi Eaker, mother and children’s missions education expert, provides parents with an easy-to-use teaching resource that fits within today’s busy schedule. Missions Moments 2 is a convenient tool to guide parents as they help their children develop a proper biblical worldview. Parents will find 52 weeks of 5-minute missions messages each paired with a 15-minute application activity for children. Each lesson is written in a simple style so that parents can adapt the message to their children’s ages, maturity levels, etc. A Bible verse to memorize is also included for each week. And finally there’s a challenging “Make It Home” section that provides ideas for how to incorporate the week’s message into the life of the whole family. Ideal for parents of elementary school-age children, Missions Moments 2 will bring your family together around God’s call to be the light of the world. Packed with a year’s worth of messages and service activities, you and your children won’t be the same after finishing this journey.

▼▲
Mitzi Eaker has been teaching children for more than 20 years. As a writer and advocate for children’s missions education, she served as the national children’s ministry consultant and Children’s Resource Team leader for Woman’s Missionary Union (WMU). She holds a bachelor’s degree in social work from Jacksonville State University in Jacksonville, Alabama, and a master of arts degree in Christian education, with an emphasis in family ministry, from Southern Baptist Theological Seminary in Louisville, Kentucky. Mitzi has participated in both missions and disaster-relief work throughout the United States, in Mexico, and abroad. In her role at WMU, Mitzi designed conferences for Christian leaders to help them incorporate missions education into their churches and homes. A dedicated wife and mother, Mitzi lives in Birmingham, Alabama. Her favorite activity is playing on the floor and laughing with her children; husband, Shane; and dog, DJ.

▼▲
I'm the author/artist and I want to review Missions Moments 2: 52 Easy to Use Missional Messages & Activities for Today's Family.
Back
×
Back
×