Missional Motherhood: The Everyday Ministry of Motherhood in the Grand Plan of God
By: Gloria Furman 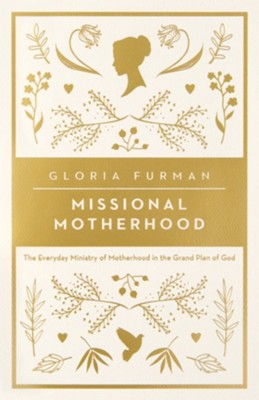 Missional Motherhood: The Everyday Ministry of Motherhood in the Grand Plan of God

There's no such thing as "just" a mom. Despite the routine tasks and mundane to-do lists, motherhood is anything but insignificant. God has designed motherhood as part of his greater plan to draw people to himself - instilling all women, whether called to traditional mothering or not, with an eternal purpose in nurturing others. In Missional Motherhood, Gloria Furman opens our eyes to God's promises intended to empower each and every woman as she makes disciples in her home, in her neighborhood, and around the world.

Furman gives moms a fresh, biblical perspective on their calling to raise and nurture children, helping them live out God’s story of redemption as they offer the message of the gospel to those around them.

Gloria Furman (MACE, Dallas Theological Seminary) lives in the Middle East where her husband, Dave, serves as the pastor of Redeemer Church of Dubai. She is the author of many books, including Labor with Hope; Treasuring Christ When Your Hands Are Full; and Glimpses of Grace.

▼▲
I'm the author/artist and I want to review Missional Motherhood: The Everyday Ministry of Motherhood in the Grand Plan of God.
Back
×
Back
×