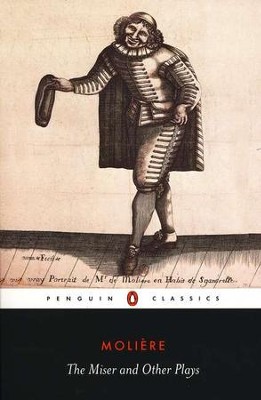 The Miser and Other Plays: A New Selection

▼▲
Moliere (1622-73) combined all the traditional elements of comedy - wit, slapstick, spectacle and satire - with a deep understanding of characters to create richly sophisticated dramas which have always delighted audiences. Includes: The School for Wives, The School for Wives Criticized, Don Juan, The Miser, The Hypochondriac. Translated by John Wood and David Coward.

▼▲
This volume of Moliere's dramatic commentaries on society presents The Miser, a misguided hero who obsessively disrupts the lives of those around him. The School for Wives is newly translated for this edition and was fiercely denounced as impious and vulgar. Moliere's response to his detractors became The School for Wives Criticized. Even more alarming to critics was his version of Don Juan. In The Hypochondriac, he produced an outrageous expose of medicine.

▼▲
Moliere was the stage name of Jean-Baptiste Poquelin (1622-1673). His plays achieved great success, especially his masterpiece, The Misanthrope, and elicited enormous controversy with their religious irreverence.

John Wood was born in 1900 and went to Manchester University. After some years in teaching and adult education he spent his working life in educational administration. Concern with the relevance of the arts in education, combined with personal predilection, led to involvement with the theatre and with the work of Moli&egrave;re in particular, as producer and translator. He also translated The Misanthrope and Other Plays and The Miser and Other Plays for Penguin Classics.

David Coward is Emeritus Professor of French at the University of Leeds, England. He won a Scott-Moncrieff prize for his edition of Albert Cohen's Belle du Seigneur.

▼▲
I'm the author/artist and I want to review The Miser and Other Plays: A New Selection.
Back
×
Back
×