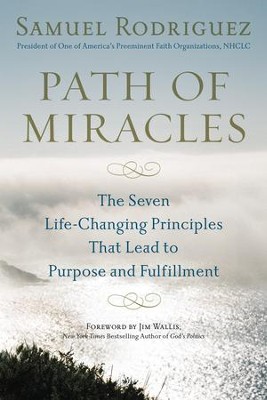 Path of Miracles: The Seven Life-Changing Principles that Lead to Purpose andFulfillment - eBook

▼▲
Take a new and refreshing look at what Jesus' death and resurrection accomplished for you. In Path of Miracles Sammy Rodriguez uncovers seven spiritual lessons that will help you discover the abundant life Jesus offers.

▼▲
The trade paperback edition of the inspirational guide by one of the most preeminent leaders of the Latino Christian community.

Reverend Samuel Rodriguez uncovers the seven spiritual lessons learned from the story of Jesus' empty tomb-lessons that can enrich, empower, and transform lives. The goal: to recognize what God has placed throughout our journey in order to guide us toward fulfillment.

Taking the story of Jesus and the empty tomb as his basis and inspiration, Reverend Rodriguez explains how these life-changing principles can be learned to create a richer, transformed life.

An inspiring book, it guides readers down the path of miracles already ahead of them.

▼▲
Samuel Rodriguez is the president of NHCLC/Conela, an international organization of more than 500,000 evangelical churches. He is a sought-after voice in White House and congressional meetings and is regularly featured on CNN, Fox News, NBC Telemundo, and other major news outlets. The author of The Lamb's Agenda, Rodriguez is the senior pastor of New Seasons Christian Worship Center in Sacramento, California, where he resides with his wife, Eva, and their three children.

Jim Wallis is a preacher, activist, author, and the Editor in Chief of Sojourners magazine. He serves on the Global Agenda Council on Values of the World Economic Forum, and previously served on the White House Advisory Council on Faith-Based and Neighborhood Partnerships. His previous books include Who Speaks for God?, The Soul of Politics, and The Call to Conversion. He lives in Washington, DC, with his wife, Joy, and son, Luke.

▼▲
I'm the author/artist and I want to review Path of Miracles: The Seven Life-Changing Principles that Lead to Purpose andFulfillment - eBook.
Back
×
Back
×