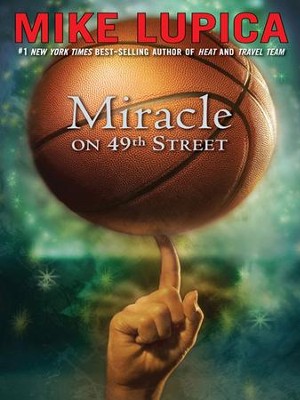 ▼▲
Molly Parker is a twelve-year-old on a mission. Ever since learning, just before her mother died of cancer, that her father is the star Boston Celtics player Josh Cameron, she's been trying to meet him. But this MVP of the championship basketball team has a hard time believing his former college sweetheart never told him she was pregnant before leaving the country to live in London. He thinks Molly must be trying to scam him for money. But Molly, living with another college friend of her mom's in Boston, just wants to get to know the father she never had. As they begin to spend time together and Molly gets to know the real Josh Cameron, she begins to wonder if her mother was right about her dad--that he has room in his heart for only two things: basketball and himself. Does Molly really want this man for a father? Together, these two strangers learn that sometimes, for things to end up the way you want them to, you have to fire up a prayer at the buzzer and hope it goes in.

▼▲
In the tradition of About a Boy comes a feel good sports and holiday novel from #1 New York Times bestselling author Mike Lupica.

Josh Cameron has it all: a World Championship ring with the Boston Celtics, an MVP award, a clean-cut image, and the adoration of millions. What he doesn't have is family. Until the day 12-year-old smartaleck Molly Parker confronts him in a parking lot and claims to be his daughter—the only daughter of Jen Parker, Josh's college sweetheart and the still the only girl he's ever loved. Trouble is, Jen Parker died last year, and now Molly has tracked down the father she never knew, the one her mother never wanted her to know about. Josh Cameron cares about two things only: himself, and basketball. The last thing this superstar wants or needs is a 12-year-old daughter. Yet this isn't just any 12-year-old. Mr. World Champion has finally met his match.

“[T]his novel is . . . an enjoyable read with interesting peeks into the world of professional basketball. It will appeal to young teen sports enthusiasts as well as kids just looking for a good story.” –VOYA

“Lupica is an extraordinarily smooth writer with a great ear for witty repartee.” –Publisher’s Weekly

▼▲
Mike Lupica is the author of multiple bestselling books for young readers, including QB 1, Heat, Travel Team, Million-Dollar Throw, and The Underdogs. He has carved out a niche as the sporting world’s finest storyteller. Mike lives in Connecticut with his wife and their four children. When not writing novels, Mike Lupica writes for New York's Daily News, appears on ESPN's The Sports Reporters and hosts The Mike Lupica Show on ESPN Radio. You can visit Mike Lupica at mikelupicabooks.com

▼▲
Lupica delivers a winning novel, creating a realistic character in Molly by authentically capturing both her fragility and pluck. (Booklist)