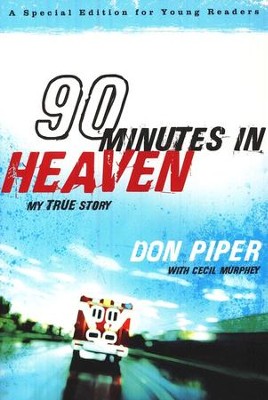 ▼▲
When Piper's car collided with an 18-wheeler, he was pronounced dead at the scene. But he came back to life---and the pleasure of heaven he experienced was replaced by a painful recovery. Your 9- to 12-year-olds will be comforted and encouraged by Piper's miraculous true story---now available in a special edition just for them! 160 pages, softcover from Revell.

▼▲
Now available in a special edition for readers age 9-12, 90 Minutes in Heaven is the runaway bestseller about one man's experience with death and life. When Don Piper's car collided with a semi-truck he was pronounced dead at the scene. For the next 90 minutes, he experienced the glories of heaven. Back on earth, a passing minister felt led to pray for the accident victim even though he was told Piper was dead. Miraculously, Piper came back to life, and the pleasure of heaven was replaced by a long and painful recovery.

An inspiring account for people of all ages, 90 Minutes in Heaven is now poised to touch and comfort children in the same way it has offered encouragement and hope to millions of adults.

▼▲
I'm the author/artist and I want to review 90 Minutes in Heaven, young reader's edition.
Back
Back