Skip to main content
BIG SUMMER BLOWOUT: Over 2,000 deals ~ up to 85% off, through 8/16. Shop now >
Aliens in the Promised Land: Why Minority Leadership is Overlooked in White Christian Churches and Institutions
By: Anthony Bradley
Stock No: WW382343 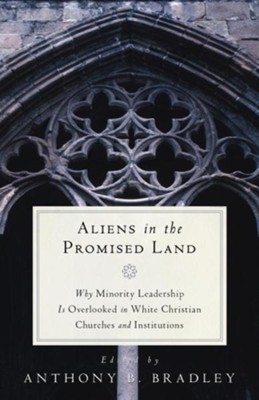 Aliens in the Promised Land: Why Minority Leadership is Overlooked in White Christian Churches and Institutions

▼▲
Today's church growth is centered in Africa, Asia, and Latin America, and evangelicalism must adapt to changing demographics or risk becoming irrelevant. Yet many evangelicals behave tribally, valuing the perspective of only those like themselves while also denying any evidence of racial attitudes in the church.

Anthony Bradley has gathered scholars and leaders from diverse tribes-black, Hispanic, and Asian-to share advice on building relationships with minority denominations and valuing the perspectives and leadership of minority Christians (not just their token presence). They seek to help evangelicalism more faithfully show the world that the gospel brings together people from all tribes, languages, and cultures.

▼▲
In an age when church growth is centered in Africa, Asia, and Latin America, evangelicalism must adapt to changing demographics or risk becoming irrelevant. Yet many evangelicals behave “tribally”—valuing the perspective of only those like themselves—while also denying any evidence of racial attitudes in the church. Anthony Bradley has gathered scholars and leaders from diverse “tribes”—black, Hispanic, and Asian—to share advice on building relationships with minority communities and valuing the perspectives and leadership of minority Christians (not just their token presence.) They seek to help evangelicalism more faithfully show the world that the gospel brings together in Christ people from all tribes, languages, and cultures.

▼▲
This is a terrific book. For years, evangelicals have discussed among themselves ways to reach minority communities, without much participation by minorities themselves. This book is a game changer. Here, black, Asian, and Latino writers say what they most want to say to the evangelical (and specifically Reformed) community. If you are tired of the usual arguments about race, as I am, this book will wake you up with some new ideas, like Lance Lewis’ suggestion. He urges a moratorium on evangelicals (even black evangelicals) planting churches directed toward blacks. I’m not sure I agree. But like many ideas in this book Lewis’s are clearly written and backed up by good arguments. That a Reformed publisher has undertaken to publish a book like this is itself a very promising development. I urge a wide readership by all who are seeking to carry out Jesus’ Great Commission. -- John Frame, Professor of Systematic Theology and Philosophy, Reformed Theological Seminary, Orlando

Make no mistake - this is not a book to be pigeonholed as merely one more addition to the ongoing conversation about faith and race. It is, rather, a book about the viability of Evangelicalism and therefore the future of western Christianity as a whole. No longer can white, western Christians conveniently turn a blind eye to their own privilege, underlying racism, and the absolute necessity of repentance and change. The question is, will the blind eyes be opened? Will evangelicals heed the prophetic word offered by the voices in Aliens in the Promised Land, or will we fade into obscurity as the rest of global Christianity comes to resemble a body of every tribe, tongue, and nation? I've heard it said that Christians sometimes answer questions that no one is asking. Here, Bradley and a host of emboldened pastors, scholars, and theologians answer questions that many Christians are afraid to ask. As such, the volume serves as a significant catalyst for conversation, prayer, and the hope that the faith once delivered can indeed be proclaimed and revealed by a diversity of members within the body of Christ. It is an effort worthy of the highest commendation. -- Rev. Adam S. Borneman, Second Presbyterian Church, Birmingham, AL.

Anthony Bradley has assembled an impressive cast of Hispanic, black, and Asian scholars to analyze the “alien” status of minorities in the “Promised Land” of evangelical America. Informed by personal, theological, and practical reflection, these sobering and often uncompromising essays challenge culturally dominant white evangelicals to move beyond their tribalism and embrace ethnic and racial diversity in their midst. “Wake up,” these contributors are saying, “The multi-cultural future of evangelicalism is now.” -- David W. Kling, Ph.D., Professor and Chair Department of Religious Studies, University of Miami

Those that have ears to ear, let the American evangelical church hear what the Spirit is saying through these teachers. The importance of this book cannot be over-stressed. In order for evangelicalism to survive into the next generation, the warnings of Dr. Bradley, et.al. must be heeded. This book not only offers personal stories and insightful analysis into the role of race in American Christian institutions, but it offers practical ideas to actively move these institutions forward. I pray that this book will be read and applied by every major American evangelical leader who wishes to honestly explore the future of American evangelicalism. -- Soong-Chan Rah, Author of The Next Evangelicalism

Never before have ethnic minorities within this “tribe” of conservative evangelicals addressed directly such explosive questions of white privilege, structural sin, unequal opportunity and the suburban cultural captivity of their churches. What I like most is that these contributors don’t dwell on past pain—and there is plenty of it! Rather, this volume is about reconstructing in faith a path towards God’s sovereign vision of human community. Anyone who cares about the future of Christianity in the North America needs to read this. -- John Nunes, Ph.D., President and CEO, Lutheran World Relief

As an African-American pastor in an white evangelical denomination, I must say that Aliens in the Promised Land: Why Minority Leadership Is Overlooked in White Christian Churches and Institutions offers no easy way out or loop holes to the problem or race and ethnicity in our churches and institutions. It calls us through the insightful experiences and expertise of its contributors to look and dig deep into our hearts, actions and faith. I left this book begging God for mercy for His church and for me. I learned that we have all dropped the ball and have been dropped on in some way when it comes to overlooking minority leadership. This book is a must read for evangelical leaders of churches and religious institutions. If more of what this book offers is not embraced by evangelical leadership, they will continue to deform in their growth while quenching God’s grace. -- Rev Howard Brown, pastor, Christ Central Church, Charlotte, NC

Thank you Anthony Bradley for collecting and contributing to this important book that prophetically addresses the issues connected to evangelicalism and minorities. Everyone, particularly church leaders, needs to read this book to benefit from the personal stories and wise counsel of the contributors as they address the issues that Asian, Hispanic, and black Christians face in predominantly white Christian institutions. -- Tremper Longman III Robert H. Gundry Professor of Biblical Studies, Westmont College

Anthony Bradley pulls together some of the church’s best minds to confront the problem of 21st century evangelicalism with grace and truth. Those willing to look honestly at the facts of the ugly, mildly treated, racist lesions of evangelicalism’s history and present – within the church, parachurch, and academy – may yet lead our cherished institutions to true repentance, all for the glory of Christ. May the Lord use this work to purify his One New Man so that all of the saints might practice a faith that serves all people with the Gospel rather than continuing in baptized supremacist ideologies that stand opposed to the message of Christ. -- Eric C. Redmond, Council Member, The Gospel Coalition, former Vice President of the Southern Baptist Convention, Bible Professor in Residence, New Canaan Baptist Church.

Is the evangelical church post-racist? Is the issue of race off the table now that the law forbids discrimination? Should we move on to other topics, in view of the progress being made on race? Not really, this book argues. The remarkable array of authors assembled here testify most appreciatively about the many improvements in recent years. Yet they speak sharply and critically in view of the on-going racialist attitudes still to be found in our Christian institutions. They also propose ways forward, and practical solutions. Required reading for anyone concerned to promote racial justice at home, in schools, in business, in churches, or anywhere people are willing to have their eyes opened. -- William Edgar, Professor of Apologetics, Westminster Theological Seminary

▼▲
I'm the author/artist and I want to review Aliens in the Promised Land: Why Minority Leadership is Overlooked in White Christian Churches and Institutions.
Back
Back