Skip to main content
SPRING CYBER EVENT STARTS NOW: And it's a really BIG deal! Up to 88% off through 5/24>
The Minister's Wife: A Memoir of Faith, Doubt, Friendship, Loneliness, Forgiveness, and More, hardcover
By: Karen Stiller
Stock No: WW441214 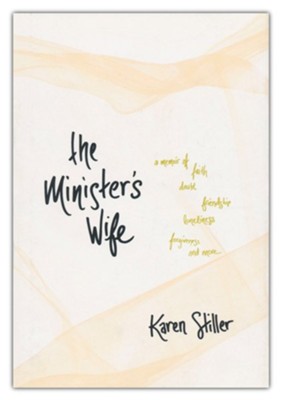 ▼▲
She never expected to be a minister’s wife. And the life she discovered was more challenging—and more beautiful—than she could have anticipated.
We all wrestle with tough questions about life and faith, and Karen Stiller has learned that answers don’t come any easier when you’re married to the minister. What does it mean to live faithfully in our complicated world? Is there a place here for me—the real me? What does everyone expect of me, and what if I fail? In The Minister’s Wife, Karen shines a light on the rhythms and tough realities of the spiritual life for each and every one of us. She explores how community helps us grow; the unexpected beauty of doubt; the messy pain of families and funerals; how church can hurt and heal; and the beauty of showing up when sometimes it is more appealing to go to a coffee shop on a Sunday morning (even when you’re the pastor’s wife).

Warm, witty, and achingly honest, The Minister’s Wife is a memoir in essays on choosing to belong, and an invitation to join a spiritual adventure.

▼▲
Stiller (Going Missional), senior editor of Faith Today magazine, wrestles with a role she didn’t expect to take on in this sharply funny memoir-in-essays. Stiller and her husband, Brent, had planned to help start a Bible college in Africa until Brent’s seminary training within the Anglican Church called for him to become a minister in rural Saskatchewan. Stiller speaks eloquently on friendship, the joy of newfound community, and the pleasures of Christmas: “I am the coach; Brent is the boxer; and the Christmas season is round after round of special services.” Stiller is also forthcoming about the struggles and rewards of being a minister’s wife, explaining the pain and joy of periodically moving along with her husband’s ministry. She also explores the triumphs (including affecting prayers she leads in her home with congregants, particularly after deaths or during large life changes) and disappointments (such as Brent not receiving a placement in New York) of church leadership. Christian readers will be particularly moved by Stiller’s deeply felt love for others and Jesus. Fans of Karen Swallow Prior will want to take a look.
Ministers and their families are objects of curiosity to many, and ministers’ wives are often expected to be an additional (unpaid) staff member while entertaining guests and raising well behaved children. Stiller humorously explodes such myths and expectations. She would like nothing better than if people removed their “clergy-tinted glasses” and saw her as a person, the same as themselves. She is devout, but not smug; she wishes for friendship and unwrinkled clothes. She loves her husband and children, but they are human beings, like everyone else, prone to outbursts and bad behavior. Stiller struggles with envy, disappointment, and the unkind things people say to a minister’s wife (including being shushed by a congregant). Warm, likable, and genuine, Stiller comes across as the sort of person who would promise to pray for you, and you know without doubt that she’d follow through. She makes convincing arguments for the power of a community of faith and all the imperfect people who comprise it. Christians, and even former Christians, will find much to like in Stiller’s book.
A memoir chronicles the life of an Anglican minister’s spouse. Stiller met her husband, Brent, in college in 1988. After Brent finished his master’s degree, he was ordained in the Anglican Church. The couple originally thought they might spend much of their adult lives working in Africa. But, as things turned out, they wound up living in various towns in Canada. The people in these towns had certain expectations about the wife of a minister. Some thought the author would be judgmental, know how to play the organ, or be upset if they didn’t pray properly before a meal. As Stiller explains, she was just as human as the next person. She was all thumbs with houseplants and felt pangs of envy about someone else’s spiritual life. In reality, friendships could be difficult. The Christmas season tended to be taxing. Words sometimes came out wrong. But while she experienced awkward situations, Stiller also found warmth and happiness. The author writes how, even with its challenges, church “helps us welcome each other, carry each other.” The book takes on a breezy, honest air as it moves between chapters with titles like “Community,” “Prayer,” and “Forgiveness.” There are remembered disagreements the author had with her husband and, perhaps most entertaining, strange things people said over the years. This is the case when a dinner guest asserted rather bluntly: “You have better stuff than we do.” Such recollections are not only funny, they also give readers a fine grasp of what Stiller’s life was actually like. Some episodes are not quite as telling. The author reflects fondly on swimming with a friend in Cold Lake, and, heartfelt though the memory is, it seems to just reiterate that friendships can be nice. Still, the good, the bad, and the beautiful are all finely blended here for a full picture. This account provides an engrossing look at what it means to be a minister’s wife.

▼▲
I'm the author/artist and I want to review The Minister's Wife: A Memoir of Faith, Doubt, Friendship, Loneliness, Forgiveness, and More, hardcover.
Back
Back