One in a Million: Journey to Your Promised Land - eBook
By: Priscilla Shirer 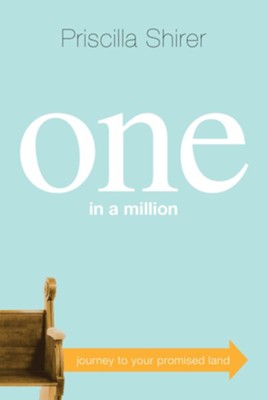 One in a Million: Journey to Your Promised Land - eBook

▼▲
Modern day Christians often hear and understand the promises of God each Sunday morning at church but then rarely choose to experience them in everyday life. In One in a Million, Bible teacher Priscilla Shirer invites us to change that pattern for good, living beyond our circumstances and expecting to see God move in miraculous ways day after day. Without a doubt, we can find and follow God's purpose for our journey. We can make it to the Promised Land! Trade paperback.

The Egyptians in Exodus 1 were intent on enslaving the Israelites, wearing them down so that God’s chosen people would become disillusioned and not live up to their destiny. Of the original two million Israelites who received God’s invitation to enter the Promised Land, only two actually entered it!

Similarly, modern day Christians often hear and understand the promises of God each Sunday morning at church but then rarely choose to experience them in everyday life. In One in a Million, Bible teacher Priscilla Shirer invites us to change that pattern for good, living beyond our circumstances and expecting to see God move in miraculous ways day after day. Without a doubt, we can find and follow God’s purpose for our journey. We can make it to the Promised Land!

Priscilla Shirer is a Bible teacher and conference speaker with a Master’s degree in Biblical Studies from Dallas Theological Seminary. She is also the author of popular books including A Jewel in His Crown, He Speaks to Me, and Discerning the Voice of God. The daughter of well-known author Dr. Tony Evans, Priscilla is married to Jerry with whom she founded Going Beyond Ministries. They live with their three sons in Dallas, Texas.

A Note From Priscilla Shirer

I watched her. For days. For weeks. For months that turned into years.

This woman was filled with God power, overwhelmed with His joy and consumed with His peace. She heard Gods voiceon a regular basisand was seeing evidence of His presence in the regular rhythms of her life. She would pray and then believe. Expect and then see. Ask and then receive.

So I watched her. She was a wife, a mom, a daughter, a sister, a regular woman with problems and concerns just like mine, and yet her life was different in so many ways. More than anything I wanted what she had, and I was determined to figure out how to get it. Our first conversation over two piping hot cups of tea began with a shower of questions. I just couldnt help myself. I was so curious about her relationship with God and how what shed learned on the pew had become such a startling reality on the pavement of her life.

That first conversation led to deeper, more intriguing ones that kept me on the edge of my seat. Like a little schoolgirl with my chin in my hands, I soaked in her wisdom and reveled in the times she laid her hands on me and prayed. A refreshing friendship developed, and I was challengedchallenged to be one of the few who would refuse to trust God with an ordinary faith or settle for a complacent walk with Him. I was compelled not just to hear about God on Sunday but to expect to experience what Id learned about Him throughout every other day of the week. I wanted more . . . more of Him, more of His Spirit, more of His gifts, more of His fruit, more of His power and His manifest presence in my life.

I must admit, its been quite a surprising journey. But once my appetite had been whet, there was no turning back. I was ruined. Mundane Christian living would no longer suffice. Not then, not now, and by Gods grace, not ever again.

Im so thrilled that you are with me for this ride because having company makes any road trip more fun. This expedition began for me several years ago and is still in progress. Gods call from mundane Christianity to a radical experience of Him has taken me down roads that, honestly, have been quite narrow. Not many travelers have chosen to take this route. Not much has changed in two thousand years. Approximately two million Jews were freed from Egypt with the opportunity to experience the milk and honey promised by Yahweh. Yet only two of that original multitude would ever walk on Canaans soil.

One in a million.

I guess I can see why many dont choose to go all the way with God. Ive sure been in that category myself at times. Its easier to stay on the main road where there are more people and far less uncertainty. And besides, the travel aint easy when youre headed in the direction of abundant living. While Id like to tell you that the sun has glistened on every leg of the trip and the cool winds of ease and convenience have brushed across my face without incident, I cant. On the contrary there have been some days when Ive had to take cover from the storms that life often brings. On occasion Ive had to whisper a prayer for help when loneliness knocked on my front door and came in to stay a while. When Ive met other travelers willing to brave these winding roads, our eyes have met and an instant heart connection has been made. Without having to say much, weve encouraged each other to continue.

I thought I knew where God was taking me when I first started out, but each leg of this voyage has led into territory Ive never seen before. Sometimes its exciting, and other times its daunting. Either way, its a ride Id rather take with you.

I cant guarantee you much, but I can say with full confidence that you wont be bored. Gods way is too unusual and mysterious for boredom to even be an option.

Its been quite a ride so far, and I dont want to encounter whats next by myself. In the pages of this book, well traverse spiritual territory that will cover mountain peaks and deep valleys, grassy knolls and barren sand dunes, but the journey will be worth it. With the turn of each page, you and I will round another corner. What well meet around one bend will bring a smile to the depths of our souls, while others will create a sting of conviction that will send us straight to our knees. Either way, the prize of abundant living will make the trip well worth it. So buckle up and grab a venti size latte. You are in for the ride of your life.

Looking forward to taking the trip with you,

▼▲
I'm the author/artist and I want to review One in a Million: Journey to Your Promised Land - eBook.
Back
×
Back
×