The Man in the Middle: An Inside Account of Faith and Politics in the George W. Bush Era - eBook
By: Timothy S. Goeglein 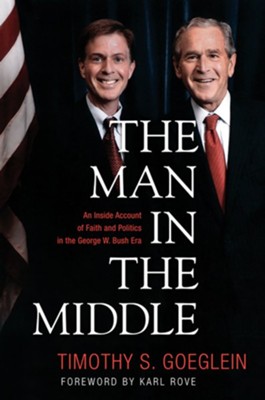 The Man in the Middle: An Inside Account of Faith and Politics in the George W. Bush Era - eBook

▼▲
Timothy Goeglein spent nearly eight years in the White House as President George W. Bush's key point of contact to American conservatives and the faith-based world and was frequently profiled in the national news media. But when a plagiarism scandal prompted his resignation, Goeglein chose not to dodge it but confront it, and was shown remarkable grace by the president. In fact, Bush showed more concern for Goeglein and his family than any personal political standing.

So begins The Man in the Middle, Goeglein's unique insider account of why he believes most of the 43rd president's in-office decisions were made for the greater good, and how many of those decisions could serve as a blueprint for the emergence of a thoughtful, confident conservatism. From a fresh perspective, Goeglein gives behind-the-scenes accounts of key events during that historic two-term administration, reflecting on what was right and best about the Bush years. He was in Florida for the 2000 election recount, at the White House on 9/11, and watched Bush become a reluctant but effective wartime president.

Goeglein, now the vice president with Focus on the Family, also looks back at how Bush handled matters like stem cell research, faith-based initiatives, the emergence of the Values Voters, the nominations of both Chief Justice John Roberts and Associate Justice Samuel Alito-in which Goeglein had a direct role-and debates over the definition of marriage.

In all, The Man in the Middle backs historians who view the legacy of President George W. Bush in a favorable light, recognizing his conservative ideas worth upholding in order to better shape our nation and change the world.

▼▲
Timothy S. Goeglein is vice president of External Relations for Focus on the Family, lobbying for the Colorado-based organization's pro-family causes in Washington, D.C. He served as deputy director of the White House Office of Public Liaison under President George W. Bush for nearly eight years. Goeglein and his wife have two sons.

▼▲
Tim Goeglein is Vice President for External Relations for Focus on the Family Action. He served for nearly eight years as a special assistant to President George W. Bush and deputy director of the White House Office of Public Liaison. Goeglein also worked for 10 years in the U.S. Senate with Sen. Dan Coates, R-Indiana, and two years at the Campaign for Working Families with Gary Bauer.

Tim's position in the Bush White House made him the man in the middle in two ways. First, he served as the president's emissary to the political rightthe think tanks, advocacy groups, religious groups, and churches. He sought to explain and build support for the president and his initiatives while at the same time listening to their concerns and bringing those back to the White House for consideration. He was also the man in the middle in that his job required him to understand and have input into policy decisions while not being among the architects of policy. That is, while he participated in the key conversations, he was in a position to observe from a somewhat objective point of view.

Tim was probably the most traveled member of the Bush White House, delivering hundreds of speeches and presentations while attending a myriad of meetings in the United States and abroad. He, his wife, Jenny, and their two boys, live in Alexandria, VA.

▼▲
I'm the author/artist and I want to review The Man in the Middle: An Inside Account of Faith and Politics in the George W. Bush Era - eBook.
Back
×
Back
×