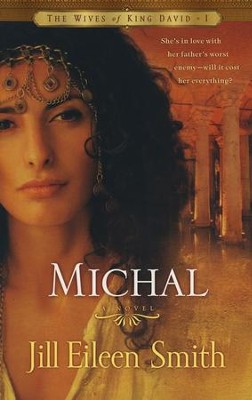 ▼▲
As the daughter of King Saul, Michal lives a life of privilege--but one that is haunted by her father's unpredictable moods and by competition from her beautiful older sister. When Michal falls for young David, the harpist who plays to calm her father, she has no idea what romance, adventures, and heartache await her.

▼▲
As the daughter of King Saul, Michal lives a life of privilege--but one that is haunted by her father's unpredictable moods and by competition from her beautiful older sister. When Michal falls for young David, the harpist who plays to calm her father, she has no idea what romance, adventures, and heartache await her.

As readers enter the colorful and unpredictable worlds of King Saul and King David, they will be swept up in this exciting and romantic story. Against the backdrop of opulent palace life, raging war, and desert escapes, Jill Eileen Smith takes her readers on an emotional roller-coaster ride as Michal deals with love, loss, and personal transformation as one of the wives of David. A sweeping tale of passion and drama, readers will love this amazing story.

▼▲
Jill Eileen Smith has more than twenty years of writing experience, ranging from articles and short stories to reviews and blogs. Her writing has won prizes in several writing contests. In addition to homeschooling her three sons, Smith has taught piano and enjoyed scrapbooking. She lives with her family in Southeastern Michigan.

▼▲
Characters of the Old Testament come alive in Jill Eileen Smiths novel for Christian adults, Michal. Michal is the story of Sauls daughter, who later became Davids first wife. The book, the first in a projected series about the wives of David, focuses on Michals exotic journey of faith and love.

The book begins with Michal as a young adolescent, in love with the shepherd boy who plays his harp to soothe her abusive and rage-filled father, King Saul. Michal is a very ambitious girl, who exploits her sister and conceives a plan to get her father to wed her to David. Her plots end up being unnecessary, for David falls madly in love with her. But then the tide of fate comes up against the two lovers when Sauls attitude toward David turns to jealousy and hatred. David must flee, leaving Michal to the frightening whims of her father and the plots of a certain guard. The focus of Michals faith journey is bitterness and bowing to the will of God. Michals life is full of loss, and she grows very bitter toward God. She also follows her own path and neglects the will of God. These things, though never mentioned by name until much later in the book, become the central theme of the novel.

The book follows the biblical account accurately, taking artistic license only with the characters and never with the facts. Smith only fills in the gaps when necessary, but otherwise remains true to the original story. Unfortunately, the first third of the book is singularly uninteresting and clichéd. Smith jars the readers with such corny phrases as his eyebrows hiked up a notch and in general seems to be a little confused as to what the setting is for her own novel. If, however, readers hold out until later chapters, they will be pleasantly surprised. Smiths storytelling experiences a slow take-off, but then rapidly improves. Smith shows herself to be up to the challenge of interpreting an exotic and unusual romance, and eventually shows her writing style to be anything but clichéd. By the end, the reader is left to wonder if Smith herself could have actually been responsible for the monotonous monstrosity that was the beginning of the book.

▼▲
In this retelling of the story of King Saul's daughter, Michal's perilous wartime adventures rival her emotional exploits as the first of King David's wives.

▼▲
I'm the author/artist and I want to review Michal, Wives of King David Series #1.
Back
Back