Skip to main content
The Mestizo Augustine: A Theologian Between Two Cultures
By: Justo L. GonzÃ¡lez
Stock No: WW851508 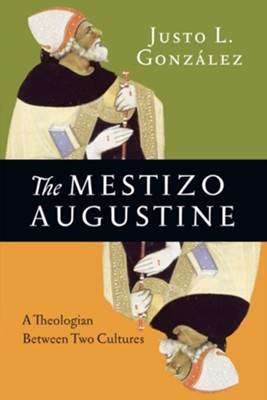 The Mestizo Augustine: A Theologian Between Two Cultures

Few thinkers have been as influential as Augustine of Hippo. From Confessions to City of God, his writings have left an indelible mark on Western Christianity. He has become so synonymous with Christianity in the West that we easily forget he was a man of two cultures: African and Greco-Roman. The mixture of African Christianity and Greco-Roman rhetoric and philosophy gave his theology and ministry a unique potency in the cultural ferment of the late Roman empire.

Augustine experienced what Latino/a theology calls mestizaje, which means being of a mixed background. In The Mestizo Augustine: A Theologian Between Two Cultures, Cuban American historian and theologian Justo González  looks at the life and legacy of Augustine from the perspective of his own Latino heritage and finds in the bishop of Hippo a remarkable resource for the church today. González  reveals how the mestizo Augustine can serve as a lens by which to see afresh not only the history of Christianity but also our own culturally diverse world.

▼▲
Justo L. González (PhD, Yale University) is an ordained United Methodist minister, a retired professor of historical theology and author of the highly praised three-volume and the two-volume . He previously taught at the Evangelical Seminary of Puerto Rico and the Candler School of Theology of Emory University. Besides his continued research and publication, he spends most of his energy promoting the theological education of Latino and Latina leaders.

"In a particularly insightful study, Justo González  both introduces the breadth of St. Augustine's thought to modern readers and explains why his theology should be considered mestizaje (characterized by in-between-ness). Augustine—as both Roman and African, as a mediator between early Christianity and medieval Christianity—becomes a potent model for the many others, like González  himself, who stand between worlds, cultures, and perspectives. It is a fine book."

"I am deeply pleased to see the new book by Justo González  on Augustine, which places him rightly in the African context. The author's theme of the crosscultural intricacies of Augustine's life illumines many other issues Christians face today. It is an extremely readable book by a distinguished church historian."

"There are many fine introductions to Augustine's life and thought. But it is hard to think of one more timely for a new generation of readers than The Mestizo Augustine. With concise elegance and critical appreciation, Justo González  recasts our imagination for Augustine's restless pilgrimage as the struggle and the wisdom of a mestizo. In doing so, he offers a compelling theological portrait of this massively influential figure of late antiquity and, importantly, of his continued relevance for our own era tempted by misplaced rage for purity."

"Justo L. González  ranks among the most important and influential interpreters of Christian history in our era. The Mestizo Augustine is yet one more outstanding achievement. This groundbreaking study of Augustine offers compelling new insights into the life and thought of the great North African theologian and pastor from the perspective of mestizaje while advancing the overall project of mestizaje theology itself to a significant degree."

"Justo González  provides us with a unique and compelling retelling of the life of Augustine. He focuses on the mestizajes of Augustine's life to show us that his rich theology was born at the crossroads of peoples, languages, cultures, ethnicities, and social change. It is here that we encounter the deepest tensions of human existence but also where we can reflect most deeply on our understanding of God and our relationships with each other. We can thank González  for reminding us through the life of Augustine that the mestizajes that we try to forestall or even deny 'may well be a sign of the future from which God is calling us.'"

"In a fresh, masterful, and highly readable way, Justo González  shows the ongoing relevance and importance of the multicultural St. Augustine engaging his own contexts from a place between and within cultures. González  provides new lenses for us to appreciate the mestizo Augustine as a resource for theology, ministry, and emerging ways of being church for our own contemporary multicultural, multiethnic, and globalized contexts in a racialized society."

"González has a gift for understanding context and nuance, and the result is a vivid and sympathetic portrayal of Augustine and a person and thinker."

▼▲
I'm the author/artist and I want to review The Mestizo Augustine: A Theologian Between Two Cultures.
Back
Back