Skip to main content
SPRING CYBER EVENT STARTS NOW: And it's a really BIG deal! Up to 88% off through 5/24>
Merlin's Nightmare
By: Robert Treskillard
Stock No: WW735093 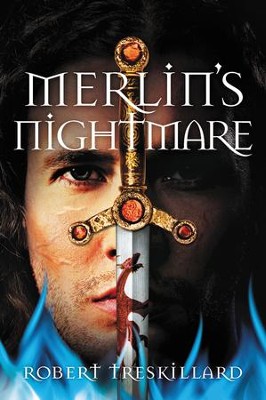 ▼▲
At the same time, Morgana brings Merlin's deepest fear to life and sets a horde of werewolves loose to destroy Britain. But when the secret purpose of this nightmare is finally revealed, will Merlin and Arthur find a way to survive---without unleashing an even greater evil?

Arthur is now eighteen, and Merlin, tired of hiding and running from his enemies, wants nothing more than to spend his days with his family and train Arthur for his rightful place as king. But when Arthur goes missing, a desperate Merlin must abandon all other quests to find him before a shadowy pursuer catches Arthur first.

Having everything to fight for, and almost nothing to fight with, Merlin and Arthur must rally Britain’s warriors against three overwhelming enemies: Saxenow hordes in the south, Picti raiders in the north, and a chilling new enemy that has arisen in the west.

At the same time, M&oacute;rgana brings Merlin’s deepest fear to life and sets a horde of werewolves loose to destroy Britain. But when the secret purpose of this nightmare is finally revealed, will Merlin and Arthur find a way to survive—without unleashing an even greater evil?

▼▲
Robert Treskillard breathes new life into the often-told tale of King Arthur and his faithful mentor, Merlin. Treskillard has managed to put a new spin on the story in this three-volume series called Merlin’s Spiral by focusing on Merlin’s story. In Merlin’s Nightmare, Arthur is now eighteen, and Merlin wants nothing more than to enjoy his family. But when Arthur disappears, Merlin stops at nothing to rescue him before one of their enemies finds him. Together they face the Saxenow in the south, the Picts in the north, and a new enemy rising in the east. And Merlin’s half-sister has unleashed werewolves–Merlin’s biggest fear since being attacked by wolves as a child. Will they survive? Merlin’s Shadow and Merlin’s Nightmare are difficult to read as standalone novels, although the author tries to give the reader enough background in the glossary to permit this. Kudos to Treskillard, who not only identifies the characters but describes what happened in the previous books that is significant to the overall storyline. His attempt to recreate the Arthurian legend from a Christian perspective is to be applauded. Recommended for public libraries and school libraries. -- Christian Library Journal

▼▲
I'm the author/artist and I want to review Merlin's Nightmare.
Back
Back