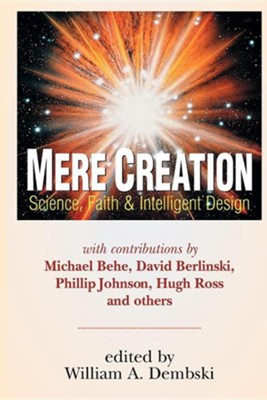 ▼▲
A landmark book challenging naturalistic evolution! When you're defending creationism, it's difficult for skeptics to refute the authoritative findings of Michael Behe. Dembski's cutting-edge research, along with the revelations of 19 other expert academics, presents evidence of an intelligent design that debunks evolution---and strengthens your witness of the Grand Designer to others! 448 pages, softcover from InterVarsity.

▼▲
For over a century, the scientific establishment has ignored challenges to the theory of evolution. But in the last decade such complacency about its scientific and philosophical foundations has been shaken. As cracks in the Darwinian edifice have begun to appear, many are asking whether a defensible alternative exists. In response to this growing crisis, a movement has emerged among scholars exploring the possibility of intelligent design as an explanatory theory in scientific descriptions of the universe. As Michael Behe has proposed in his landmark Darwin's Black Box, at the cellular level there appears to be a high level of irreducible complexity that suggests design. In this book Behe is joined by eighteen other expert academics trained in mathematics, mechanical engineering, philosophy, physical anthropology, physics, astrophysics, biology, ecology and evolutionary biology to investigate the prospects for this emerging school of thought. Challenging the reigning ideology of materialistic naturalism on both scientific and philosophical grounds, these scholars press the case for a radical rethinknig of established evolutionary assumptions.

▼▲
I'm the author/artist and I want to review Mere Creation: Science, Faith and Intelligent Design.
Back
×