Skip to main content
SPRING CYBER EVENT STARTS NOW: And it's a really BIG deal! Up to 88% off through 5/24>
Mending the Divides: Creative Love in a Conflicted World - eBook
By: Jon Huckins, Jer Swigart
Stock No: WW95123EB 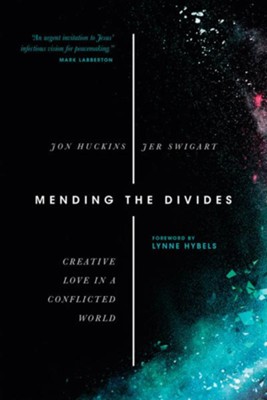 Mending the Divides: Creative Love in a Conflicted World - eBook

Peacemaking is the mission of God, so it should also be the vocation of his people. But do we know what it means to be makers of peace? Jon Huckins and Jer Swigart offer a theologically compelling, richly personal, and intensely practical set of tools in Mending the Divides that equip us to join God in the restoration of broken relationships, unjust systems, and global conflicts. These modern-day peacemakers help us understand that peace is not the absence of conflict—peace is when relationships that were once severed have been repaired and restored.

▼▲
Conflict, hatred, and injustice seem to be the norm rather than the exception in our world, our nation, our communities, our homes. The fractures and fissures run so deep that we're paralyzed by our hopelessness, writing off peace as a far-fetched option for the afterlife. Even if there was the possibility of peace, where would we begin? Instead of disengaging, Jon Huckins and Jer Swigart invite us to move toward conflict and brokenness, but not simply for the sake of resolving tensions and ending wars. These modern-day peacemakers help us understand that because peacemaking is the mission of God, it should also be the vocation of his people. So peace is no longer understood as merely the absence of conflict—peace is when relationships once severed have been repaired and restored. Using biblical and current-day illustrations of everyday peacemakers, Mending the Divides offers a theologically compelling, richly personal, and intensely practical set of tools that equip us to join God in the restoration of broken relationships, unjust systems, and global conflicts.

▼▲
Jon Huckins is a pastor and the cofounding director of The Global Immersion Project, a peacemaking training organization helping individuals and communities move toward conflict equipped to heal rather than to win. After much international travel and study in the Middle East, Jon focuses his writing and speaking on peacemaking, local/global engagement, and activating the Church as an instrument of peace in our world. Jon has written for numerous publications including , , , and . His books include and , and he is a contributing author to multiple books. Jon regularly speaks at churches, universities, and conferences and has a masters degree from Fuller Theological Seminary in theology and ethics. He lives in San Diego with his wife, Jan, three daughters, and one son, where they colead an intentional Christian community seeking to live as a reconciling presence in their neighborhood of Golden Hill.  Jer Swigart is a church planter, a social innovator, an organizer, a professor, and the cofounding director of The Global Immersion Project, a peacemaking training organization that forms, equips, and mobilizes individuals and communities to enter any kind of conflict to heal rather than to win. He was the founder and lead pastor of The Open Door Community, a courageous collective of people pursuing Gods dream for the San Francisco Bay area, and he is a contributing author to a number of books that focus on theology, leadership, justice, and reconciliation. A modern-day peacemaker, Jer has found himself contending for restoration in beautifully bizarre corners of our global village. Whether in the tribes of northern Pakistan, the slums of India, the red-light districts of Southeast Asia, the violence of Israel and Palestine, or the racial injustice of his own neighborhood, Jer loves people in a way that disarms violence and dismantles divides. His engagement within national and international conflicts has formed him into a guide for the church as she seeks to leverage her influence as an instrument of peace in our world. A sought-after speaker, Jer frequently teaches in the areas of peacemaking and conflict transformation, faith and culture, neighbor and enemy love, spiritual formation, culture creating, and innovative leadership. He completed his undergrad at The University of Northwestern-St. Paul and has an MDiv from Fuller Theological Seminary, where he received the prestigious David Allen Hubbard Award. He currently resides with his family in Bend, Oregon.

▼▲
"In their thoughtful and encouraging book on the difficult, necessary work of being peacemakers, Mending the Divides, Jon Huckins and Jer Swigart call on Christians to engage with conflict at home as well as in their broader neighborhoods and nations, and even globally. Huckins and Swigart make a powerful and convincing argument that Jesus’s teachings were chiefly about peacemaking, about knowing and loving the ‘other,’ and about recognizing that everyone belongs to one community. Real-world stories—many borrowing from the authors’ work with the Global Immersion Project, which aims to educate Christians in conflict areas around the world on how to achieve resolution and peace—show that such peacemaking can be a reality in everyday life. They will inspire those who might not otherwise know how to get started. The ten-ten-ten method for goal setting that is laid out in these pages provides a sturdy framework for making change that works regardless of the type of conflict being confronted and shows a way forward into the work of peace." -- ForwardReviews.com, September/October 2017

"These modern-day peacemakers help us understand that because peacemaking is the mission of God, it should also be the vocation of his people. Using biblical and current-day illustrations of everyday peacemakers, this book equips disciples of Jesus to move toward conflict and seek the restoration of our relationships, our communities, and our world, offering practical steps to engage in the kingdom-building work of waging peace." -- C. Christopher Smith, Englewood Review of Books

"This is a great book for anyone struggling with any level of conflict, including conflict of how to live as a Christian in North America today. The book will both challenge and inspire. Read it." -- Leonard Klassen, Mennonite Brethren Herald, December 11, 2017

"One of the most challenging tasks within the church in the next few decades will be the work of peace-building and reconciliation, of learning from and loving neighbors who are often very different. Taking the parable of the Good Samaritan as their starting point, Huckins and Swigart have written a practical, hands-on manual that shares their rich experiences working in peace-building across various contexts, from local to global." -- Jenny Yang, Christianity Today, December 13, 2017

"Jon Huckins and Jer Swigart, co-founders of The Global Immersion Project, believe peacemaking practices should be grounded in Jesus’ teachings. Mending the Divides: Creative Love in a Conflicted World is full of stories, insights, and questions for discussion and shows what it means to live as a true global citizen." -- Sojourners, February 2018

▼▲
I'm the author/artist and I want to review Mending the Divides: Creative Love in a Conflicted World - eBook.
Back
Back