Skip to main content
SPRING CYBER SALE: The sale you've been waiting for! Up to 85% off through 5/25>
The Men of Lancaster County Series, Volumes 1-4
By: Mindy Starns Clark, Susan Meissner
Stock No: WW222577 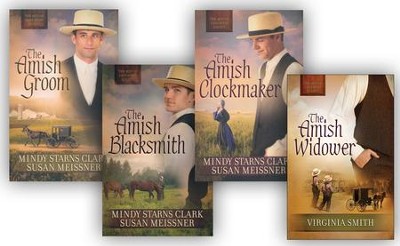 By: Mindy Starns Clark, Susan Meissner
More in Men of Lancaster County Series
Harvest House Publishers / Paperback
Write a Review
Expected to ship on or about 07/02/21.
Email me when this product is available.
Stock No: WW222577

Product Close-up
* This product is available for shipment only to the USA.

Born to an ex-Amish mother and an Englisch father, 23-year-old Tyler Anderson was raised as a military kid until the age of 6, when his mom passed away. His dad, shipping off to yet another overseas post, placed Tyler in the care of his Amish grandparents, an arrangement that was supposed to be temporary. It lasted a lifetime. Rachel Hoeck is the young woman waiting for Tyler's proposal. She senses that though he loves her and wishes to make a commitment to her and his Amish beliefs, part of him still wonders whether an Amish lifestyle is truly for him.

Apprenticed blacksmith Jake Miller is skeptical of Priscilla Kinsinger's innate ability to soothe troubled horses, especially when he has own ideas on how to calm them. Six years earlier, Priscilla's mother died in an awful accident at home, and Priscilla's grief over losing her mother was so intense that she was sent to live with relatives in Ohio. She has just returned to Lancaster County. Not that her homecoming matters to Jake, who is interested in courting lighthearted Amanda Shetler. But Jake's boss is Priscilla's uncle, and when the man asks Jake to help his niece reconnect with community life, he has no choice but to do just that. Surprisingly, he finds himself slowly drawn to the beautiful but emotionally wounded Priscilla.

Newlywed Matthew Zook is expanding his family's tack and feed store when a surprising property dispute puts the remodel on hold--and raises new questions about the location's mysterious past. Decades earlier, the same building housed a clock shop run by a young Amish clockmaker named Clayton Raber. Known for his hot temper, Clayton was arrested for the murder of his beloved wife, a crime almost everyone--including his own family members--believed he'd committed, even after charges were dropped. Isolated and feeling condemned by all, Clayton eventually broke from the church, left Lancaster County, and was never heard from again. Now the only way Matthew can solve the boundary issue and save his family's business is to track down the clockmaker. But does this put Matthew on the trail of a murderer? A timeless novel of truth, commitment, and the power of enduring love, where secrets of the past give way to hope for the future.

Seth Hostetler believes a lasting love is beyond all hope after the devastating loss of his second wife.  His mamm and sister are determined to see him happily married once again.  How can he open up his heart after only one year, when their relationship could tragically end? He decides to give the pottery trade a try and quickly takes to this creative outlet, pouring his emotions into each shape he creates.  The district leadership disaproves of the fancy nature of his art. During this time he meets an Englisch woman who is employed by the Amish to sell their wares to tourists.   Seth now finds the things he wants most threaten to pull him away from the life he's committed himself to live.

▼▲
I'm the author/artist and I want to review The Men of Lancaster County Series, Volumes 1-4.
Back