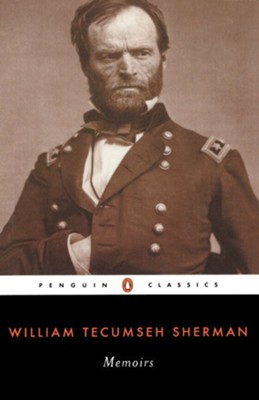 ▼▲
Before his spectacular career as commanding general of the Union forces of the West, William Tecumseh Sherman experienced decades of frustration and failure. He participated in many of the critical events of early-nineteenth-century America: the protracted war against the Indians, the California gold rush, the banking panics, the political turmoil, and the elusive search for fame and fortune.
Sherman's place in American history was still in doubt during the first stages of the Civil War, when he reluctantly led a Union brigade to humiliating defeat at Bull Run. It was not until his major role at the Battle of Shiloh that he began to assert his brilliance as a military commander. After his capture of Atlanta in 1864, which secured Abraham Lincoln's reelection, Sherman launched the infamous March to the Sea. Combining a ruthless scorched-earth strategy with shrewd psychological and propaganda, Sherman forever changed the nature of American warfare.

▼▲
Before his spectacular career as General of the Union forces, William Tecumseh Sherman experienced decades of failure and depression. Drifting between the Old South and new West, Sherman witnessed firsthand many of the critical events of early nineteenth-century America: the Mexican War, the gold rush, the banking panics, and the battles with the Plains Indians. It wasn't until his victory at Shiloh, in 1862, that Sherman assumed his legendary place in American history. After Shiloh, Sherman sacked Atlanta and proceeded to burn a trail of destruction that split the Confederacy and ended the war. His strategy forever changed the nature of warfare and earned him eternal infamy throughout the South.

Sherman's Memoirs evoke the uncompromising and deeply complex general as well as the turbulent times that transformed America into a world power. This Penguin Classics edition includes a fascinating introduction and notes by Sherman biographer Michael Fellman.

▼▲
William Tecumseh Sherman (1820–1891) was a renowned general of the Union Army during the American Civil War. Credited with the saying "War is hell" and a staunch advocate for total war, Sherman was a longtime companion of Ulysses S. Grant. His reputation as a skilled military strategist arose from his leadership in campaigns such as the Battle of Shiloh and the 60,000-man March to the Sea, weakening the resolve of the South and paving the way to victory for the Union Army. After Grant became president in 1869, Sherman took over as general commander of the US Army, a position which he held until he retired in 1884.

Michael Fellman was a prolific historian of the nineteenth-century United States and a professor emeritus of history at Simon Fraser University in Canada. He is best known for Inside War: The Guerrilla Conflict in Missouri During the American Civil War and Citizen Sherman: A Life of William Tecumseh Sherman. He died in 2012.

▼▲
I'm the author/artist and I want to review Memoirs of General William T. Sherman.
Back
×
Back
×