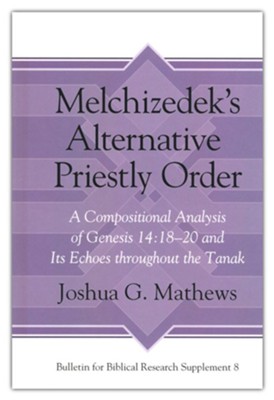 Gen 14:18-20 is a brief episode depicting the encounter between Abram and Melchizedek. Taking this episode and its context in the Pentateuch as the starting point, Mathews sets out to analyze the text as it has been composed, in order to understand the biblical and theological significance of this priest-king Melchizedek. The thesis proposed and investigated is that Melchizedek’s royal priestly portrayal in Genesis initiates a priesthood that is intentionally presented as an alternative to Aaron and his priesthood. The claim is that this distinct priestly order is evident in the biblical text as we have it, and it may be discerned by reading the text carefully, on its own terms, with close attention to its compositional features.

Chapter 1 introduces the study and offers an overview of the history of interpretation related to Genesis 14 and Melchizedek. In ch. 2, various hermeneutical issues and approaches are examined in order to clarify methodology and identify some of the problems being addressed. In ch. 3, the heart of the book, Mathews considers Gen 14:18-20 in the context of the Pentateuch, focusing on Melchizedek in relation to the Abrahamic narrative and covenant, the royal message of the Pentateuch, and Aaron’s priesthood. Beginning with Psalm 110, ch. 4 identifies echoes of Melchizedek and his priesthood in several texts in the Prophets and Writings. The book concludes in ch. 5 with a summary and synthesis of the preceding analysis as well as some implications and suggestions for further research.

▼▲
I'm the author/artist and I want to review Melchizedek's Alternative Priestly Order: A Compositional Analysis of Genesis 14:18-20.
Back
×