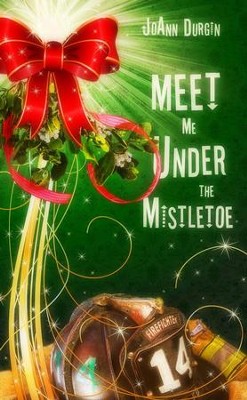 Meet Me Under the Mistletoe: Novelette - eBook

▼▲
Jacob Marston, Starlight, Iowa's hometown hero made a long-ago promise to the Lord: he won't kiss a woman until he knows she's "the one." Now at age twenty-eight, the rugged firefighter questions if it'll ever happen. Then, he meets his best friend's sister, and Jake believes he's found the woman of his dreams. But what will she think when she discovers his vow? When Julia makes an unexpected confession on Christmas Day, Jake shares his secret with her, and it looks as though happily-ever-after will make a holiday appearance.But somehow, everyone in the tiny town of Starlight learns Jake’s secret, and he's instantly transformed from town hero to laughingstock. Did Julia reveal his secret? Can Jake forget the humiliation and find his way under the mistletoe to share a forever kiss with Julia?

▼▲
A full-time paralegal, JoAnn Durgin lives with her husband and three children in her native southern Indiana.

▼▲
I'm the author/artist and I want to review Meet Me Under the Mistletoe: Novelette - eBook.
Back
×
Back
×