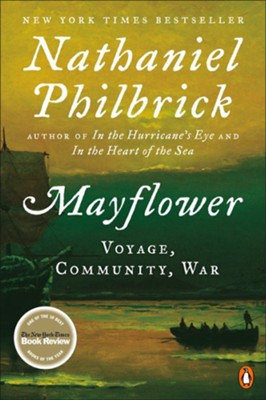 ▼▲
"It was Philip who led me to the Pilgrims." One loose end, beckoning to be followed through the tangle of early American history, is what led Nathaniel Philbrick to follow leads and untangle knots, to gather together into one smooth skein the narratives, histories, letters, documents, and poems written by the early settlers of New England. From these, and from the revealing records kept by two very different men---the pious and stalwart Plymouth governor William Bradford and the audacious and proud Indian-fighter Benjamin Church---he has woven a spectacular tapestry filled with images of the triumphs and tragedies of humanity.

We've all heard at least some version of the story: how, in 1620, the Pilgrims sailed to the New World in search of religious freedom; how, after drawing up the Mayflower Compact, they landed at Plymouth Rock and befriended the local natives, who taught them how to plant corn and whose leader, Massasoit, helped them celebrate the first Thanksgiving. From this inspiring inception came the United States. But the story of the Pilgrims does not end with the first Thanksgiving. When we look at how the Pilgrims and their children maintained more than 50 years of peace with the Wampanoags and how that peace suddenly erupted into one of the deadliest wars ever fought on American soil, the history of Plymouth Colony becomes something altogether new, rich, troubling, and complex. Instead of the story we already know, it becomes the story we need to know.

Traditionally, the Pilgrims have symbolized all that is good about America; more recently, they have been decried as evil Europeans who annihilated the innocent Native Americans. What you will discover as you follow their story is that the real-life Indians and English of the seventeenth century were too smart, too generous, too greedy, too brave---in short, too human---to behave so predictably. Given the unprecedented level of suffering and death during King Philip's War, it is not surprising that both the Indians and the English began to view each other as subhuman and evil. What is surprising is that even in the midst of this hellish conflict, there were Englishmen who believed the Indians were not inherently malevolent and there were Indians who believed the same about the English. These were the ones whose rambunctious and intrinsically rebellious faith in humanity finally brought the war to an end, and they are the heroes of this story.

Here is a fresh and extraordinarily vivid account of one of our most sacred national traditions by an internationally renowned author. From the Mayflower's arduous Atlantic crossing to the eruption of King Philip's War between colonists and natives decades later, Philbrick chronicles this dramatic history that is at once tragic and heroic, and that still resonates with us today.

▼▲
"Vivid and remarkably fresh...Philbrick has recast the Pilgrims for the ages."--The New York Times Book Review

With a new preface marking the 400th anniversary of the landing of the Mayflower.

How did America begin? That simple question launches the acclaimed author of In the Hurricane's Eye and Valiant Ambition on an extraordinary journey to understand the truth behind our most sacred national myth: the voyage of the Mayflower and the settlement of Plymouth Colony. As Philbrick reveals in this electrifying history of the Pilgrims, the story of Plymouth Colony was a fifty-five year epic that began in peril and ended in war. New England erupted into a bloody conflict that nearly wiped out the English colonists and natives alike. These events shaped the existing communites and the country that would grow from them.

▼▲
Nathaniel Philbrick is the author of In the Heart of the Sea, winner of the National Book Award; Mayflower, finalist for the Pulitzer Prize; Bunker Hill, winner of the New England Book Award; Sea of Glory; The Last Stand; Why Read Moby Dick?; Away Off Shore; Valiant Ambition, and most recently, In the Hurricane's Eye. He lives in Nantucket.

▼▲
I'm the author/artist and I want to review Mayflower.
Back