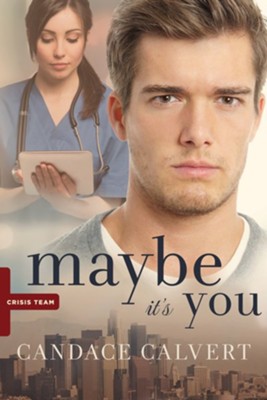 Maybe It's You, Crisis Team Series #3

Sloan Ferrell is an ER nurse with a new job at Los Angeles Hope Hospital who is finally safe after a fresh start in life, leaving behind a man involved in a serious crime. Micah Prescott is the marketing consultant who asks Sloan to become the new face of Hope Hospital, to improve the hospitals image. He volunteers as a crisis responder to fill a void left by a family tragedy. When several crimes in the area expose the details of Sloan's past, her safety is at risk.

▼▲
ER nurse Sloane Ferrell escaped her risky past—new name, zip code, job, and a fresh start. She’s finally safe, if she avoids a paper trail and doesn’t let people get too close. Like the hospital’s too-smooth marketing man with his relentless campaign to plaster one “lucky” employee’s face on freeway billboards.

Micah Prescott’s goal is to improve the Hope hospital image, but his role as a volunteer crisis responder is closer to his heart. The selfless work helps fill a void in his life left by family tragedy. So does a tentative new relationship with the compassionate, beautiful, and elusive Sloane Ferrell.

Then a string of brutal crimes makes headlines, summons responders . . . and exposes disturbing details of Sloane’s past.

Can hope spring from crisis?

▼▲
Changing her name and moving to a new city, emergency room nurse Sloane ¬Ferrell hopes to put her dark past behind her with a new start at Los Angeles’s Hope Hospital. Enter Micah Prescott, a marketing consultant seeking to find “the face of LA Hope” for his new campaign, and he believes Sloane is it. The two clash immediately, as Sloane wants to stay out of the spotlight. Then a string of violent crimes threaten to expose Sloane, and a relentless reporter is hoping for a big scoop. Adding to her anxiety is her growing attraction to Micah. VERDICT: This third installment in Calvert’s “Crisis Team” series (after Step by Step; By Your Side) features fully rounded characters, medical drama, and plenty of suspense. Calvert’s former career as an ER nurse lends authenticity, and her themes of God’s grace, forgiveness, and redemption will inspire readers seeking spiritual ¬encouragement.
ER nurse Calvert (the Crisis Team series) intertwines a mob drama with the frenzy of a hospital emergency room in this explosive page-turner. . . . Calvert adeptly intertwines drama, passion, hope, and her medical expertise to deliver a suspenseful tale that will leave readers guessing until the end.

▼▲
I'm the author/artist and I want to review Maybe It's You, Crisis Team Series #3.
Back
Back