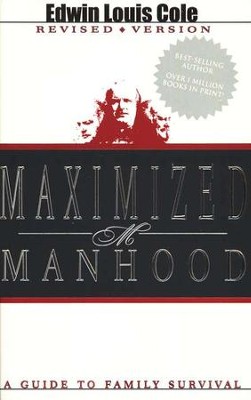 ▼▲
Responsible male leadership is still lacking in many of today's homes, churches, and businesses. This revised edition of Cole's bestseller expands on the truth that "manhood and Christlikeness are synonymous." Tackling tough topics like pornography, adultery, television addiction, and immaturity, Maximized Manhood presents a life-changing prophetic charge to the heart of honest manhood.

▼▲
Pornography. Adultery. Television addiction. Immaturity. Dr. Edwin Louis Cole, known as "the father of the Christian men’s movement," was not afraid to tackle the tough topics that affect men today. His straightforward, biblical insights help men and women alike to realize their full potential in Christ. Putting the principles found in Maximized Manhood into practice will revolutionize your home and transform your life into what God designed it to be. This newly revised edition of a best-selling book for men just got better!

▼▲
Dr. Edwin Louis Cole (1922–2002), known as "the father of the Christian men’s movement," was called by God to speak with a prophetic voice to the men of this generation. To that end, he founded the Christian Men’s Network, a ministry that majors in men and communicates the reality that manhood and Christlikeness are synonymous. A former pastor, evangelist, missionary, business executive, and denominational leader, Dr. Cole and his wife, Nancy, served the Lord together for more than fifty years. Over four million copies of his books are in circulation in more than forty languages, including his best-selling Maximized Manhood. Since his recent death, his legacy and his vision are being carried on by his "sons" in the faith as they reach tens of thousands of men each month via books, videos, and other media.

"This is a man with the word for men today."
—Mike Singletary, NFL Hall of Famer

"Edwin Louis Cole is doing wonderful, critical work on the front-line of spiritual warfare. I think every man
should participate in the Christian Men’s Network."
—Theodore Baehr, Chairman, The Christian Film and Television Commission

"I hope to convey somehow to the men I influence the influence that Ed Cole’s words have had on my life."
—Carman, Musician

"Edwin Louis Cole is an example to men: an inspiration to the men of America in a time that cries out for
just such leaders with sound moral value."
—Oliver North, Lt. Colonel, U.S. Marine Corps (ret.)

"God has developed a magnificent ministry in Edwin Louis Cole. He has ministered to me, drawing out of
me an intensity for Christianity that God has placed deep within me."
—Bill McCartney, Founder, Promise Keepers

"Ed Cole...many regard as the forerunner of the current Christian men’s movement."
—Charisma Magazine, July, 1993

▼▲
I'm the author/artist and I want to review Maximized Manhood, Revised: A Guide to Family Survival.
Back
×
Back
×