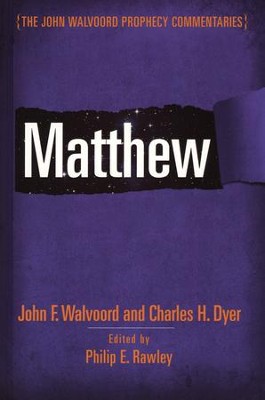 ▼▲
Bridging the Old Testament and the New, Matthew's Gospel presents Jesus both as the prophesied Messiah and as a king who will reign on Earth at his second coming. In this fourth installment of Walvoord's commentary series, the authors illuminate the text chapter by chapter, providing an accessible overview in the dispensationalist tradition. Based on the ESV. 416 pages, hardcover from Moody.

What does the first book of the New Testament teach?

As the first gospel, the book of Matthew is a bridge between the Old Testament and the New. It presents Jesus as the Messiah predicted in the Old Testament, but also as the Savior whose death was necessary for the salvation of mankind. Yet Matthew also describes the future Kingdom of Jesus when He will reign on earth at His Second Coming.

In this fourth volume of the renewed Walvoord Commentary Series, renowned biblical scholar and prophecy expert John Walvoord, along with Dr. Charles Dyer, walks readers through the gospel of Matthew chapter by chapter and unfolds his message of Jesus’ Messianic identity, teachings, miracles, and future return as victorious King.

Revised and updated throughout and based on the text of the English Standard Version (ESV), this new edition of Walvoord’s commentary will serve a whole new generation of pastors, leaders, and laypeople.

▼▲
JOHN F. WALVOORD (A.B., D.D., Wheaton College; A.M., Texas Christian University; Th.B., Th.M., Th.D., Dallas Theological Seminary), former president of Dallas Theological Seminary and editor of Bibliotheca Sacra, America's oldest theological quarterly, was recognized as one of the leading evangelical theologians in America and an authority on systematic theology and eschatology. His academic background and extensive travel in the Middle East greatly enriched his theological and eschatological studies. He authored numerous books on theology and biblical prophecy, including The Revelation of Jesus Christ, Jesus Christ Our Lord, and Daniel: The Key to Prophetic Revelation.

DR. CHARLIE DYER served for 33 years on the faculty and in the administration of three different institutions, including 20 years at Dallas Seminary and ten years as Provost of the Moody Bible Institute. In 2010 Charlie became Professor-at-Large of Bible for Moody Bible Institute and host of The Land and the Book radio program, which is heard on more than 350 stations across the United States. For much of his time in ministry Charlie has taken groups to Israel and the other lands of the Bible. Over the past four decades he has traveled to Israel nearly a hundred times, helping several thousand people experience firsthand the life-changing impact that comes from spending time in the land of the Bible.

In addition to his speaking, teaching, and guiding, Charlie has authored or co-authored numerous books, including The Rise of Babylon, What's Next?, The Christian Traveler's Guide to the Holy Land, Character Counts, 30 Days in the Land with Jesus, 30 Days in the Land of the Psalms, A Voice in the Wilderness, Strike the Dragon, The ISIS Crisis, and Clash of Kingdoms. He also contributed to The Bible Knowledge Commentary (Jeremiah, Lamentations, and Ezekiel), Nelson's Old Testament Survey (Isaiah-Malachi), and The Moody Bible Commentary (Jeremiah, Lamentations, and Ezekiel).

Charlie and his wife Kathy live near Phoenix, Arizona. They have two grown children and four grandchildren.

PHIL RAWLEY is a former Moody Publishers textbook editor, one of the founding editors and writers for Today in the Word, and a free-lance writer living in Rockwall, Texas. He is a graduate of the University of South Florida (B.A., 70) and Dallas Theological Seminary (Th.M., 80). Phil and his wife Sarah have two children and a grandson.

▼▲
I'm the author/artist and I want to review Matthew: The John Walvoord Prophecy Commentaries.
Back
Back