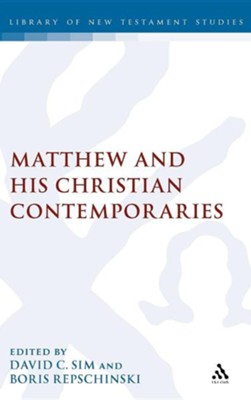 Matthew and His Christian Contemporaries

▼▲
This volume aims to compare the author of Matthew's Gospel with a selection of contemporary Christian authors and/or texts. Recent Matthean scholarship has highlighted the distinctiveness of this early Christian writer by emphasising his clear Jewish perspective in addition to his Christian affiliation. He can accurately be perceived as both Jewish and Christian because he holds that Christian commitment demands both observance of the Mosaic Law and faith in Jesus as the Messiah. But if Matthew is distinctively Jewish and Christian, how does he compare with other early Christian writers? Much of the New Testament literature was composed by Paul himself or by his later followers, and these Christians held the view that the Mosaic Law no longer had relevance in the light of the Christ event. Other New Testament texts that are not Pauline, e.g. the Gospel of John and the letter to the Hebrews, appear to agree with Paul on this point. Consequently, Matthew stands apart from other texts in the canon with the possible exception of the letter of James. The volume will therefore establish the distinctiveness of Matthew by comparing his theological perspective with his major sources, Mark and Q, and with the two remaining Gospels, the Pauline epistles, the letter to the Hebrews and the epistle of James. The comparison of Matthew with non-canonical texts, the Didache and the letters of Ignatius of Antioch, is important because much work has been done in these areas recently. Given Matthew's distinctive portrayal of Jesus, a comparison of Matthew and the historical Jesus is also demanded in the context of this volume.

▼▲
I'm the author/artist and I want to review Matthew and His Christian Contemporaries.
Back