EARLY CHRISTMAS SALE: Shop over 900 items up to 85% off through 9/29 >
Married but Lonely: Seven Steps You Can Take with or Without Your Spouse's Help
By: David E. Clarke Ph.D. 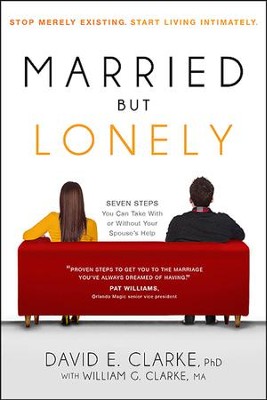 Married but Lonely: Seven Steps You Can Take with or Without Your Spouse's Help

Married...but Lonely offers a proven strategy to help your husband learn how to open up, express his love daily in special ways, and connect to you emotionally and spiritually. Start today and discover the kind of vibrant, loving marriage you've always wanted.

▼▲
Seven Steps to a New Husband!
You married a good man. He loves you. He’s committed to you. He treats you well. You fully and sincerely appreciate who he is and what he does for you and for the family. The problem is, he does not meet some of your most important, God-given needs. Eighty-five percent of all husbands are intimacy-challenged. Your conversations are brief, safe, and superficial. He does not reveal what he’s really thinking and feeling inside. He believes your marriage is great. He’s perfectly happy…and the intimate, romantic, emotional part of you is dying a slow death. Working together, the two of you can create an intimate marriage. In Married...but Lonely Dr. David Clarke will show you seven steps that you as the wife can implement with or without your husband's cooperation and begin to experience the kind of marriage you've always wanted.

▼▲
Dr. David Clarke is a Christian psychologist, popular speaker, and the author of nine books, including The Total Marriage Makeover, The 6 Steps to Emotional Freedom, A Marriage After God’s Own Heart, Cinderella Meets the Caveman, and Kiss Me Like You Mean It. A graduate of Dallas Theological Seminary and Western Conservative Baptist Seminary, he has been in full-time private practice for twenty-five years. An experienced media guest, Dr. Clarke has appeared on shows produced by numerous television and radio networks. Dr. Clarke has been married to his beautiful wife, Sandy, since 1982.  They have four children.

▼▲
"Married&hellip;but Lonely has proven steps to get you and your spouse to the marriage you've always dreamed of having." —Pat Williams, Orlando Magic senior vice president and author of Leadership Excellence

▼▲
I'm the author/artist and I want to review Married but Lonely: Seven Steps You Can Take with or Without Your Spouse's Help.
Back
×
Back
×